This week, we ventured just a ways up the street from Sweeten’s NYC headquarters to the East Village for a tour of a gut-renovated one bed, one bath co-op. This place was — to use the technical term — a disaster. As the apartment’s new owner, Henry, was clear to note in his Sweeten project post, the kitchen was destroyed, the bathroom was destroyed, the living room was destroyed…the whole place needed modern re-design and upgrades that would improve flow and use of space. Henry couldn’t move in until work was done, so we introduced him to this Sweeten contractor to manage some serious demolition and rebuilding. Henry works for an investment bank in New York City and took an appraising look at the kitchen, bathroom, living room, and bedroom of his new purchase. It wasn’t just that the unit had considerable damage in each room, Henry also saw the potential for better use of space and ways to connect the rooms to one another. He planned to remove a dividing wall between the kitchen and living room and re-orient the kitchen so that it would open toward the rest of the apartment and let more light in. Henry also found himself puzzled by decisions the previous owner made in the bathroom. Half of the bath had been lined with faux wood paneling and the other half was inexplicably blocked off by the tub’s entire length. The East Village certainly has plenty of old tenement-building bathrooms, but this was on another level.

The contractor’s team played a big role in suggesting solutions, finalizing layout plans, and selecting materials for this full overhaul. The kitchen wall came down to reveal a generous open living area, and the team installed brand new pre-finished 5″ wide plank wood flooring (from Home Depot) to unite the entire apartment. Henry went with his experts’ consensus that white shaker cabinetry would modernize and brighten the kitchen, and added a masculine, contemporary touch with a mixed material backsplash that incorporates dark and light steel and glass elements.

The contractor found the neutral quartz countertop and floated a five burner Bosch gas stove in the center of the new kitchen peninsula. Henry wanted a hood that wouldn’t stand in the way of the new open plan – extensive online research led him to a heavy-duty but slim and round Sirius stainless steel hood. Henry continued the high-end appliance theme with a Bosch dishwasher and fridge and added a Kraus single-lever faucet to the sink. Henry joined the impressive ranks of New Yorkers Who Have Laundry IN Their Homes by stowing an LG front-load washer and dryer pair in what would otherwise be an inaccessible kitchen corner. Things of beauty, washers, and dryers are. 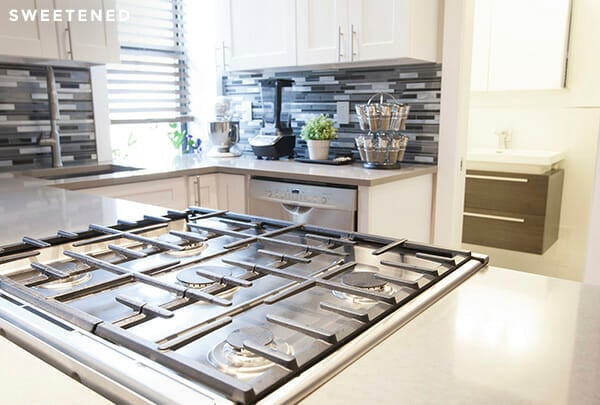 In the bathroom, the team ripped out the old tub and put in Italian ceramic floor tiles that mimic a light wood grain finish. Henry decided on a simple and modern half wall and full shower tile and created a beautiful accent wall with rippled gray tile that suggests flowing water. The shower floor is now anchored with a blue-gray small cube tile. The team added a frameless glass shower door with chrome finishes and installed a modern, wall-mounted sink vanity that Henry likes for its clean lines and hotel spa look. A set of American Standard shower fixtures, a Toto toilet, and a Home Depot lighting fixture keep the new bath feeling bright and modern. 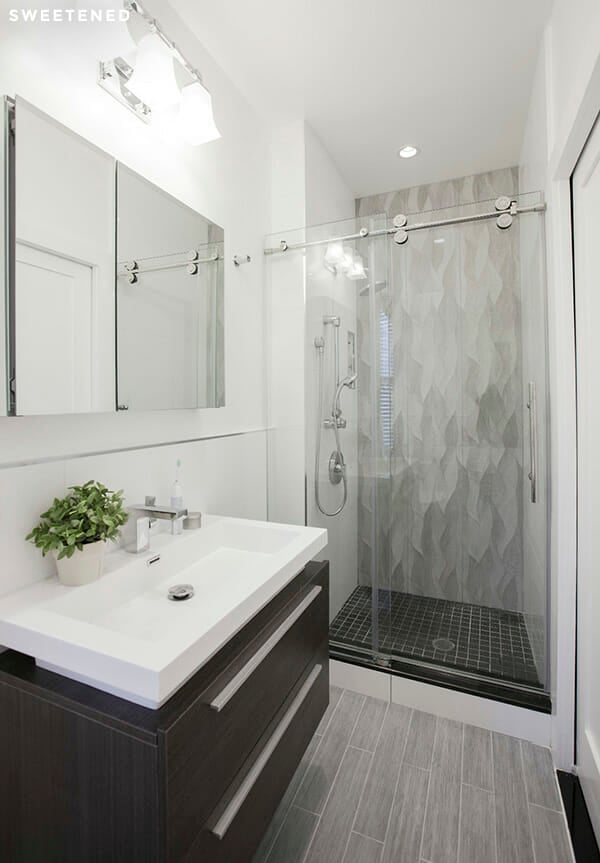 Henry’s expert team did a lot of cosmetic work to return the living areas and bedroom to full working order. Henry chose a neutral Benjamin Moore gray and loves the tall, streamlined baseboard molding that the contractor suggested using. New closet doors with 93″ height doors were added to the bedroom and the apartment’s east-facing windows are now stylishly dressed in warm wood blinds, another standard Home Depot find. Thank you, Henry, for inviting us in! We love seeing this contractor do their thing and are so glad that we could help you find the right folks for this project.