A Leak Leads to a Luxe Remodel 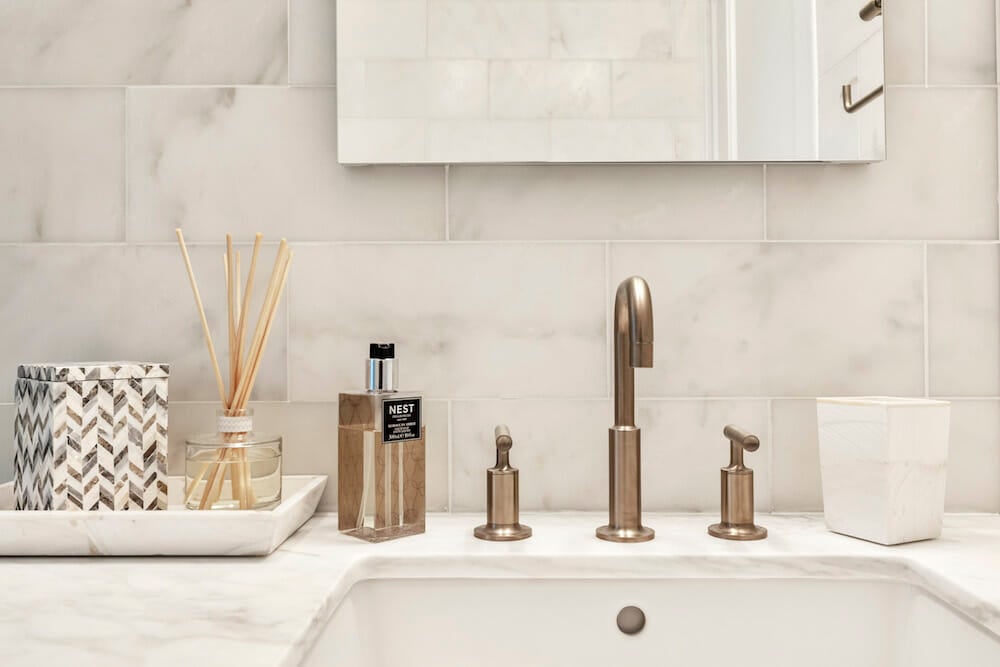 Project: Repair a leak and update the look of a bathroom

Before: The homeowner bought her 1931 West Village studio co-op in 2013 and gut renovated the entire space—minus the bathroom. Recently, the building’s management let her know that there was a major leak behind the walls. Since a portion of the bathroom would have to be demolished to identify the source and then fix the leak, she decided to go through with a full gut renovation.

“I was looking for a reputable and reasonably priced general contractor who would not only do a great job, but that I could fully trust and who would be flexible given the nature of the situation,” she shared. While resolving the issue and fixing the leak was the most important element of the project, the homeowner also wanted to make cosmetic changes to match the luxe, timeless, and high-quality feel of the rest of her renovated home. After: The homeowner posted her project to Sweeten and received multiple matches and bids. When she met one of her matches in person and “thought he was too good to be true,” the homeowner requested references she could speak to directly. “His references described him as someone who was honest and trustworthy, hardworking, easy to work with, did high-quality work, and would do whatever it took to make a client happy,” she said. After matching with the general contractor, she soon found out the references were spot on.

They tackled the renovation together, focusing first on repairing the leak and subsequent damage, and from there, honing in on the look and adding more storage. She consulted with a designer, Damon Liss, who helped out on her previous renovation, and he suggested where to go for materials. Ultimately the finishes were selected to be cohesive and consistent with the rest of the home. That meant lots of natural and marble stone, plus polished chrome hardware. The homeowner went to the Kohler experience store and worked with a salesperson to select fixtures. She gave up a bit of shower space to add in a bigger vanity and decided against centering the sink to maximize counter space. Throughout the experience, there were those expected, and otherwise, challenges that the general contractor helped her navigate. For example, when they waterproofed the shower to meet New York City code, the building engineer informed them that the building had a higher standard than the city. An additional layer of protection would be needed to meet the building’s standards. The general contractor quickly took action to make the necessary updates. He also stepped into conversations with suppliers to move things along and paid close attention to the project status throughout the process. The homeowner was particularly concerned about an involved renovation and construction process going on in the already-finished home. “My general contractor and his team took great care with my apartment, built trust quickly, and drove a high standard on all aspects of the project,” she shared.

Though the renovator did have to move out of her home for the project to be completed, her general contractor and his team made the whole process easy and manageable. “Even my building management and suppliers were blown away by his professionalism, work ethic, attitude, and quality of work.”

“Overall, I’m really happy with the result and how the process went,” she said.

Bonus: “I will only ever buy something that I can renovate,” the homeowner said. She loves the creative process, from picking materials to seeing the space come together.

Check out Angela’s classic bathroom in a historic landmark building.