This week’s guest author hails from Manhattan’s Upper West Side. Evelyn came to Sweeten to find a general contractor to help right decade-long wrongs in her lovely co-op’s kitchen and bathroom. Read on down for the full story on a classic before and after!

After living in NYC for nearly 10 years, I realized it might be time to put on my grown-up girl shoes, build some solid roots, and pay a mortgage rather than just renting. I remember asking my real estate agent how people usually knew which place to buy. He simply said you just know. He was right. It took a few months of looking and just as I was feeling my most disheartened, I stepped into what would be my converted studio and I KNEW this was going to be my home. And we lived happily ever after.

Except, while I did love my new home on sight, it was not without its imperfections. For a co-op building that has been around for over 90 years, it was in wonderful shape, well-maintained and in a fantastic Upper West Side neighborhood. I can’t say I had much to complain about… and yet, when I first searched for an apartment, I had two basic requirements. I wanted a workable kitchen that was hopefully separated from the rest of the living space, and I wanted a decent bathroom. Luckily, both requirements were fulfilled, but there was room for improvement.

The kitchen, while adorable and full of storage, wasn’t conducive to major cooking spurts. The dishwasher had leaking issues—temperamental is a good way to describe it. The floor had cracks. The counter space was limited and only one person could move at a time in there. There were these wonderful glass cabinets that were attached to each end of the galley kitchen. While I appreciated the storage and display possibilities, the awkward height and width just ended up making my kitchen seem smaller. As for my bathroom, it just needed some updating.

I loathe cleaning and wanted a home that was easy to care for but tailored to my particular needs. I wanted to bring my kitchen up to the modern age but maintain a bit of that retro vibe. For me, after months of aspirational pinning on Pinterest, that meant a black and white kitchen (stark black and stark white) with pops of color. I had a false start with my renovation a few years ago. I talked with some contractors referred to me by friends, but I wasn’t in the right space financially or mentally to deal with a renovation. Fast forward two to three years later, and it was now or never. Once again, I had no idea how to begin. But hurrah for the internet! I googled various NY contractor sites and found Sweeten.

What appealed to me most about Sweeten was the matching system. I posted what I wanted and contractors found me. I could read up on them and see their previous work. It made a daunting task less so. In my case, Sweeten Expert Jon wasn’t one that was matched with me. I was browsing the site, noticed his work, and emailed Sweeten to see if they could match us. When I first met Jon, I felt at ease. He was smart, had great ideas, and understood the type of vibe I was going for.

My budget was decent but nothing too crazy. I spent a weekend at IKEA figuring out my game plan. One of the biggest decisions for any kitchen are the cabinets. I chose the whitest, glossiest cabinets at IKEA. Even on the sunniest of days, my apartment doesn’t have a lot of natural light. I figured making my kitchen as white as possible would help to make at least part of my home bright—I was right. The glossy finish was practical; it’s easier to clean. When it comes to the interiors, I was quite captivated by drawers. In all the places I’ve lived, drawers had never been much of an option, other than the utensil drawer. Seeing the various ways in which I could get my mixing bowls out by pulling out a drawer instead of digging into the back of a cabinet was revolutionary! I wanted as many drawers as possible, and definitely a pull-out trash bin. While I had many ideas, the actual execution (measurements, what would actually work versus what I wanted) was a bit out of my realm. Luckily Jon was great with all of that. He would shoot me ideas or measurements of what I needed to look for. I would send him the appliances, etc., and he would assess if it was the correct size or not (yay for teamwork!). Because I do have a NYC kitchen, full-size appliances were not in the cards. I opted for a taller refrigerator (European-sized if you will, with freezer drawers on the bottom), compact dishwasher, and a much deeper sink (got that from Amazon, 10” deep). With the measurements in mind, I was also able to find a really good-sized but still compact-ish oven.

I tried to stay sensible with my appliances. I went for solid brands but didn’t go big on the pricing. My splurges were contained to unexpected accessories. The favorite splurge is my Kartell light blue lamp (which was actually recommended by Jon—excellent taste). I also went a little lavish for my floor. I knew I wanted larger-scale black and white tiles set in a diamond pattern, but nearly every tile store insisted the white tile could never be the pure white I wanted. I was considering options I could settle for when I luckily stumbled upon a really knowledgeable salesperson. He explained that pure white tile would be an issue if I went with porcelain or ceramic—but he did have one other option: glass. To achieve my desired look, he recommended glass for the white and granite for the black. My previous floor was prone to damage if anything fell; this dream floor would not have that issue, plus the tile is super glossy to boot. Perfect.

To complete the stark black and white effect, I decided on white subway tiles and a black countertop. With my aversion to cleaning, a black quartz countertop would hide messes a bit easier. Initially I thought I would do granite, as everyone is wont to do, but I like that quartz is more low maintenance and also more uniform in color and tone (since it’s not a natural stone).

One of the biggest transformations was the addition of my window seat, one of Jon’s ideas from our initial meeting. Previously, there was a radiator in that space, but, in all the years in my apartment, I never used it. With the window seat complete with open shelving below, wasted space became not only a place to sit but I could have more storage. While Jon suggested paneling to disguise the shelving, I opted to keep it open. I prefer the open shelving as a great way to display some of my colorful kitchen accessories, cookbooks, and other knickknacks. I was excited by the idea of a window seat, but I did not expect the vibrancy, coziness, and warmth it brings to my new kitchen. I absolutely adore it! 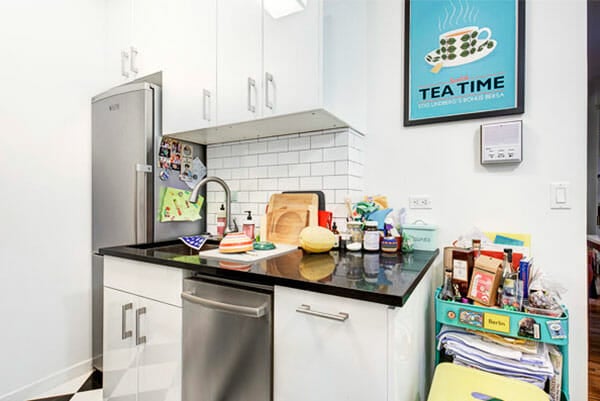 My bathroom was less of a dramatic change but the tweaks made were very much needed. Initially, I had wanted a super blue floor. After discovering that was an impossible ask, I left it to Jon’s discretion. He sent me some options and I went for a less crazy but still lovely blue-gray slate. The tiles were huge (love that) and it’s easy to clean.

Besides the tile, I knew I needed to upgrade the shelving above my toilet. When I first moved in, I installed a cheap cabinet from Bed Bath and Beyond. Very functional, as I had very little space, but it was just…there. After exploring some ideas, I went for open shelving. I found this great wooden shelf from West Elm that we cut in half. The brackets holding up the shelving were not exactly my favorite. I wanted something unobtrusive more in-line with my aesthetic. I had shown Jon a picture of an idea but didn’t really think much about getting that exact look. But to my surprise, he found a perfect facsimile, if not something better. Basically, they were just old pipes that were upcycled as shelving brackets. And they look fantastic. Overall, I am wildly happy with the results. The renovation itself was LOTS of work but suffice to say, what I learned was immense. Having had no idea where to even begin, Sweeten really made a very scary, life-changing task seem less daunting. With so much information and helpful service, I was to find the perfect contractor for me to execute my dream. And were I ever to embark on such a venture again, Sweeten is definitely where I would go to first.