A Home Becomes a Pied-à-Terre

A remodeled space is a welcome home on the East Coast Nellie, who works in television, and Lauren, a designer, had a nagging thought every time they paid their rent: their hard-earned money could go toward their mortgage rather than paying for someone else’s. With the looming closure and repair of their main transport artery, the L subway line in Brooklyn, they finally took the plunge and bought an apartment. The 700-square-foot, one-bedroom co-op was built in Jackson Heights, Queens, in 1936. “It’s a peaceful vibrant neighborhood that we’ve come to really enjoy,” Nellie said. (As fate would have it, a job relocation brought the couple to Minnesota following the purchase and renovation, so they maintain their Jackson Heights pad as a pied-à-terre.) The apartment’s initial appearance was bland and uninspired, calling for a full renovation of kitchen, bathroom, and living space. A fire a few years earlier had destroyed much of the original prewar detail, which took the pain out of the couple’s decision to modernize the space. “Our style, in general, is modern, so we like clean lines and black accents,” Nellie said. The apartment also felt too compartmentalized and opening it up would make a smaller home feel big and airy.

To execute their remodel, they posted their project on Sweeten, a free service matching renovators with vetted general contractors, and found a contractor to create their vision. We had heard that living in a space during a reno can be stressful and we knew we wanted to renovate, so we extended our rental lease. 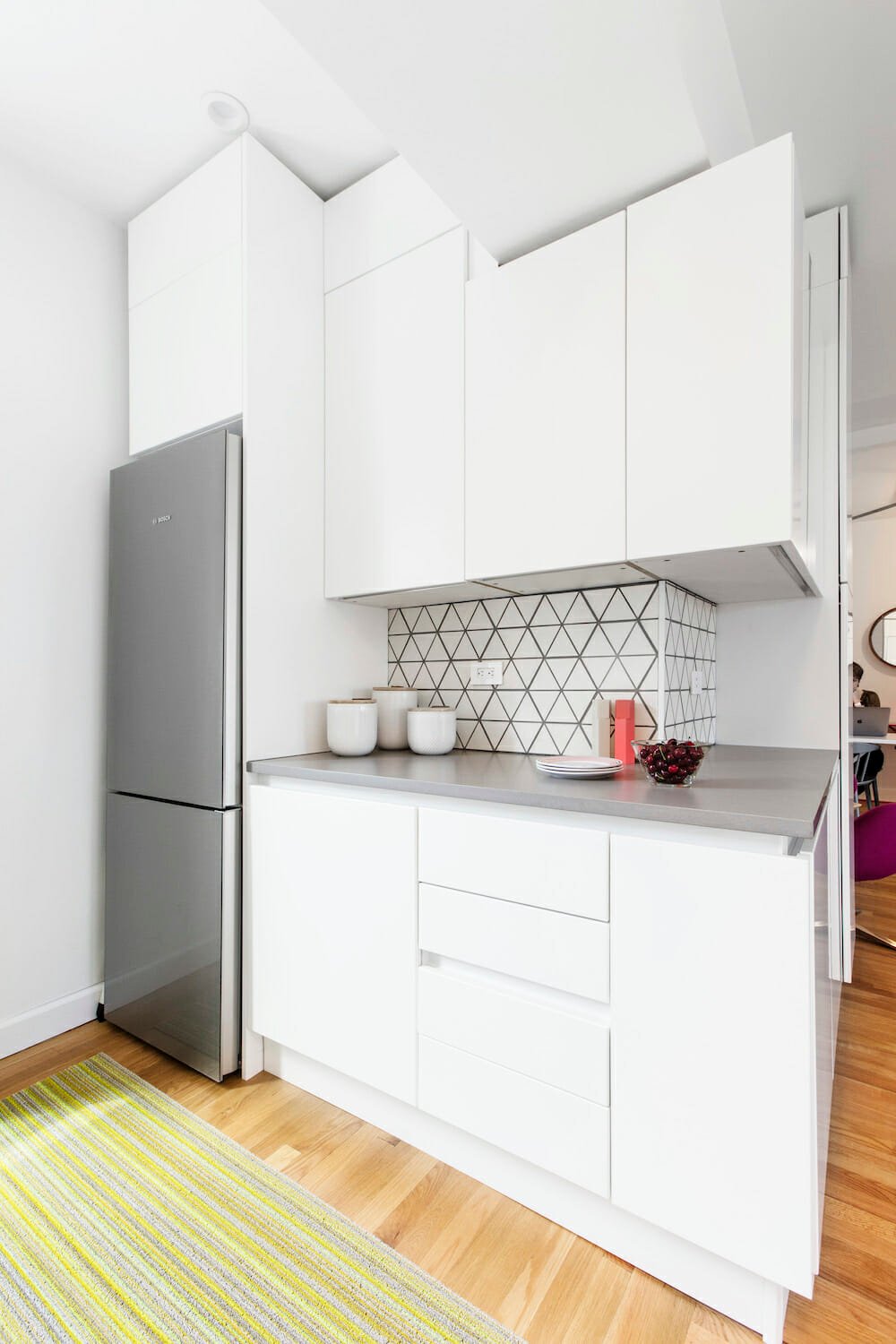 The original kitchen design had it tucked away from the living space. The contractor opened it up to the living room and added cabinetry that went to the ceiling and wrapped around the new, wider opening. “This afforded us extra storage space,” Nellie said. “We even fit a dishwasher, which we never had in previous apartments, so that was exciting.” The space was also outfitted with semi-custom Italian cabinets and a hidden pullout trash can (a big plus for Lauren and Nellie). In the bedroom, the first port of call was the closet—there wasn’t any storage in the room. Nellie and Lauren picked out something large, but simple from Ikea. Their general contractor installed it but needed to shift the entrance to the bedroom to accommodate it.  “It was our contractor’s idea to add some molding at the bottom and frame it on the sides to make it look built-in,” Nellie said. Custom knobs also elevated the wardrobe’s appearance. The bedroom wardrobe, providing both form and function ran power into the closet space giving the couple an out-of-sight space to charge electronics. At the time of the renovation, the couple had three cats. “We turned the bottom of a hallway closet into their food and water area and a little hideout,” Lauren said. There was also a specialized spot to hide the litter box. For the bathroom, Nellie and Lauren originally dreamed of a walk-in shower. Instead, they opted for a sunken tub with a hinged glass door. Although the couple’s aesthetic was modern, they gave a nod to the apartment’s prewar roots by installing classic subway tiles on the walls and black hexagon floor tiles. Their contractor discovered that much of a shower wall could be pushed back four inches. Where the wall couldn’t be pushed back, he added a handy ledge right next to the shower with a niche shelf to store items. Previously, the bathroom door had swung in. Nellie and Lauren envisioned a pocket door to reclaim some of that space. However, wiring in the walls made this impossible. Instead, they opted for a barn door (they also added a barn door for the bedroom near the apartment entrance).

The couple decided not to live in the apartment during the renovation. “We had heard that living in a space during a reno can be stressful,” Nellie said. “and we knew we wanted to renovate, so we extended our rental lease.” They did move in with an incomplete kitchen. “We set up a makeshift kitchen with a folding table and just ate takeout and food from an air fryer for maybe three months,” Nellie said. “We did dishes in the bathroom sink.” The entire apartment was painted white for a bright backdrop. Voice-activated ceiling fans—“I’m kind of a tech junkie,” Nellie said—have proven perfect for both summer and winter. To further open up the apartment, the duo removed a wall that separated the foyer from the living space to allow natural light to flow into that area. Initially, they didn’t know what to do with the space and eventually turned it into a small seating area. “I think where we’ve landed now makes sense, but it took some time to get there,” Nellie said.

Lauren and Nellie loved the whole renovation process, although decision fatigue did set in towards the end. “You don’t realize how many decisions there are to be made,” Nellie said. One bit of advice the couple has for other first renovators is to be prepared for your project to take longer than planned.

In the end, Lauren and Nellie are “thrilled” with the results and see their new-look apartment as an embodiment of who they are as people. “It’s quirky and fun and colorful and modern—all of our favorite things,” Nellie said.

Thank you, Lauren and Nellie, for sharing your New York home!

A rental studio became a pied-à-terre.