Bedrooms with Style and Storage to Spare

Like the rest of your home, your bedroom is a place to surround yourself with the things you love. It’s also a place for more personal trinkets and mementos, which means storage for those (and, of course, all your clothes) is key. By incorporating custom built-ins, floating shelves, and even a hidden closet, these Sweeten homeowners’ private spaces are certain to inspire. The large bedroom in Whitney and Laurence’s apartment was a huge plus—the awkward closet layout was anything but. Their contractor knocked down the four separate closets and created one dressing room to accommodate both of their wardrobes. Careful planning left ample room for two large dressers, plus a king-size bed. To top it off, their feng shui consultant advised on the furniture plan and placement to summon the harmonious, well-organized bedroom of their dreams. The bedroom in this homeowner’s apartment boasted stunning natural light thanks to its west-facing windows—it just needed some minor storage reconfiguration to bring it up to snuff. To take advantage of the high ceilings, the contractor built open shelving across the length of the room. The original closet was moved between the bedroom and bathroom, and reimagined as a walk-in dressing room. When Claudia set out to redesign her bedroom, a window seat was at the top of her list, along with the need for more storage. In order to meet both demands, a multi-functional built-in was designed around the casement to house books and keepsakes. Staying true to her vision, a custom seat was added and topped with an upholstered cushion to create a cozy spot for curling up with a good book. The bedroom in Hari and Kaity’s apartment had limited closet space and lots of square footage left over for furniture. To address growing storage concerns, the couple decided to use the far wall of the bedroom to build out a pair of full-size closets filled with custom shelving and storage. Now that they have plenty of room to store clothing and more, the original closet was transformed into an office nook. When a redesign of their apartment knocked down most of the walls in favor of an open-plan arrangement, Mario and Joe realized they needed more wall space to display their growing treasures from travels around the globe. Stacked floating shelves in their bedroom became the perfect solution to showcase their collection. 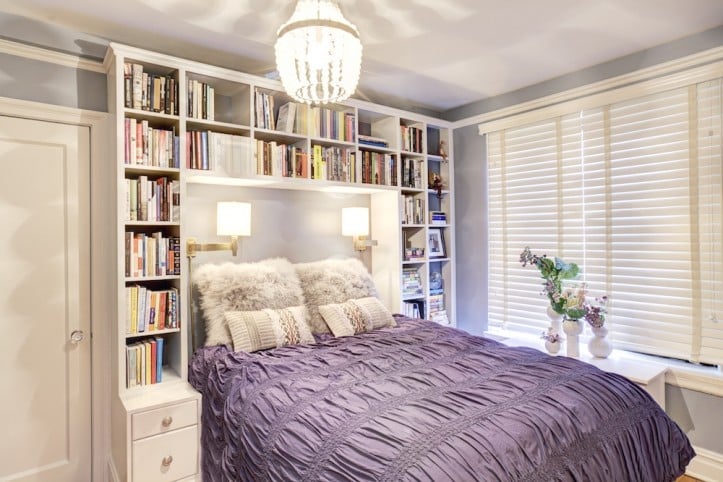 With a large assembly of books and a serious lack of storage space, Christine turned to the nearly blank canvas of her bedroom for a thoughtful solution. The wall behind her bed was transformed into a library with a custom built-in that reaches from floor to ceiling, while a pewter paint finish softens the predominantly white space. Key elements for a personal library include wall sconces that are essential for reading in bed. By preserving the wall between the bedroom and newly created walk-in dressing room, Jerry and Janet were able to move the closet out of sight while keeping it easily accessible. Positioning the bed in the middle of the room with the dressing area behind the headboard adds an interesting architectural element to the space. The streamlined design also complements the original 1910 window moldings that were painted black for a touch of contrast.

This film editor chose to renovate and reconfigure her small studio rather than move to a new apartment. Check out her colorful and multifunctional space.