This Kitchen Is Made for Family Gathering

It basically doubled in size Project: Open up a dated kitchen

Before: Gina, a product director, and Dan, who works in account and finance, moved into his childhood home in Media, Pennsylvania, after relocating for a new job and learning they were going to start a family (their son Jack is now 2 years old). Dan’s parents were planning to retire and head south, so the couple rented their 1950s traditional brick, split-level home for a few years. It gave them time to think about the work they’d complete if they decided to make it their own. When they did buy it, the first-time homeowners had a renovation vision underway for the old-fashioned kitchen. The layout wasn’t ideal for entertaining or cooking, and they wanted to increase the square footage, too. “We wanted a bright, open kitchen that was traditional but with clean, modern touches,” Gina shared. The duo posted their project to Sweeten and were matched with a general contractor. After: The renovators decided to combine the formal dining room and existing kitchen to build one long cook space with plenty of surface space and seating. “One major must-have was creating a large island with a butcher block countertop. Instead of having a traditional table and chairs, we wanted to have stools all around the table where people could casually gather,” Gina said. Plus, they still have a separate dining area on the lower level of the home in what was once a living room.

To take advantage of their much larger kitchen, the renovators decided against installing upper cabinetry. Ceiling-height cabinets surrounding the two-door refrigerator and island drawers offer more than enough storage. 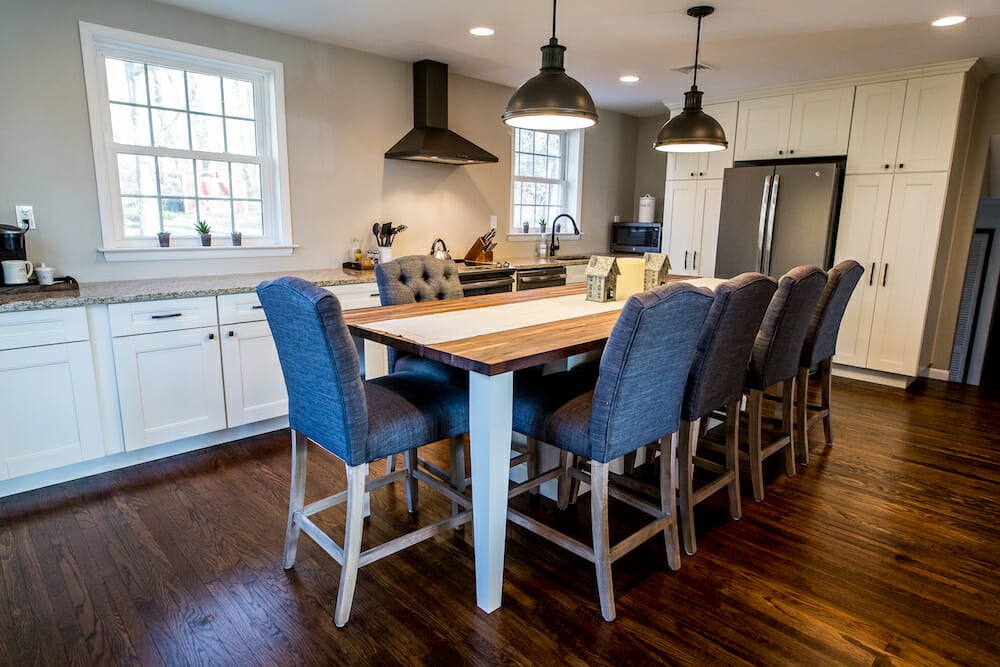 The first-time renovators’ biggest worry was finding a reliable contractor. Sweeten matched Gina and Dan with a general contractor they felt comfortable with and worked hand-in-hand with them to first come up with a plan and then execute it. As a former project manager, Gina especially appreciated the contractor’s detailed timelines that laid out when each renovation step would occur. “They set up times for each task and ended up wrapping things up earlier than expected. They took whatever extra time they had and tried to get other things done based on the project, which really helped keep everything on track,” she shared. Renovating the kitchen with a one year old in tow also meant the family needed plenty of notice about noisier or more disruptive work, which their project manager always delivered. “Having a dedicated project manager who was as skilled as he was, made us a bit sad when the project was over and we knew we wouldn’t see him anymore—I actually cried and hugged him our last day. I think it’s very rare anyone ever has that reaction to a kitchen renovation,” Gina said.

Bonus: Their contractor also replaced a window over the kitchen sink to match the other white framed ones.

This is how much it costs to renovate in Philadelphia, PA.