A Family of Four Finally Settles In

Courtney and Jim make peace with their Brooklyn home

Renovating wasn’t top of mind for Courtney, an assistant principal, and Jim, a human resources professional, when they first purchased their apartment in the Clinton Hill Co-ops. After having children years later, they realized the dark and crowded apartment (with chipping paint) wasn’t working for their family. Familiar with Sweeten and the renovations they completed in various apartments in their building co-op, they posted their project to achieve their goal of a well-organized, family-friendly home (complete with Jim’s “must-have” kitchen island). We moved to Clinton Hill over ten years ago, and have always loved the neighborhood with its history of housing for returning servicemen who worked in the Navy Yard. On a total whim, we went to an open house in the Clinton Hill Co-ops and made an offer on the first apartment we saw: an 800-square-foot, one-bedroom that had been converted into a junior two-bedroom. Our bid was accepted and we were happily shell-shocked. Neither of us even thought about a renovation and how we might make it happen, though in hindsight everything was dated when we moved in. 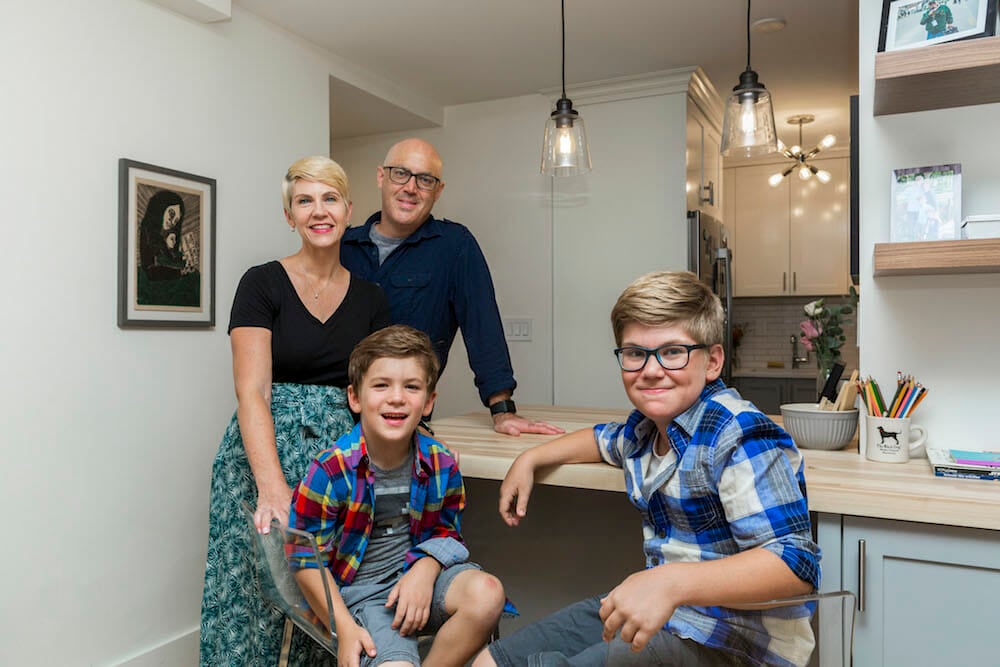 Once we had kids, we realized our place was dark, crowded, and lacking in functional storage. Paint was chipping everywhere, our ‘80s cabinets were falling off the walls, and it was just, aesthetically, a sad place to live. With two active little boys, Charlie, 10, and Wyatt, six, we suddenly felt like we had outgrown the place we initially loved.

I was frighteningly familiar with the Clinton Hill Co-op section of the Sweeten website. Our neighbor also used Sweeten to renovate her kitchen, and it looked fantastic. It seemed like a simple concept, but Jim and I were just completely overwhelmed with the idea of a renovation. We also understood that because our apartment really felt like it was falling down around us, we would need to change almost everything.

We decided to look for a place upstate, hoping that more room and a home for weekend getaways would help alleviate the stress of our overcrowded and dark apartment. We made an offer on a house, had it approved, started to negotiate, and realized we needed to feel good in our primary residence before we took on a second space. We headed straight to Sweeten, were matched with three general contractors right away, and within a week picked our contractor. He was incredibly responsive and patient with us as we walked through our apartment over and over again, thinking about the best way to open our kitchen, update the bathroom, reconfigure our bedroom, shore up our pockmarked walls and ceiling, refinish our floors, and add storage everywhere. We were giddy with the concept of overhead lighting and were wired for several fixtures in the living room and kitchen, as well as recessed lights in the hallways and bathroom. Because our apartment had been dark and crowded for so long, we gravitated toward a simple, minimalist design with white and gray paint to brighten the space and give it a clean look. Jim grew up with visions of a kitchen island where everyone could gather to eat and socialize–that became our only non-negotiable. It helped us focus our planning on the kitchen first. We knew we wanted custom cabinets, so our contractor brought in his cabinetmaker to meet with us and walk through the layout. Within a week, they had sent us a 3D rendering of our new kitchen, with Jim’s dream island, plus an extended butcher block counter ideal for our boys to sit and finish homework while we cook. I had initially wanted bold wallpaper for the wall above the extended counter, but our contractor talked us into chalkboard paint—now a huge hit with the kids. They draw on it, and we display chores or to-do lists there. Our contractor created a lot of extra storage under the island, including drawers for our pots and pans, plus a pantry along the extended counter. We have a dishwasher for the first time ever and love the kitchen tile. Initially, the door to our bedroom was directly off of the kitchen, and it was framed by a pocket door on one side and a really ugly built-in cabinet on the other. Our contractor tore out both of those walls, built a new wall in the kitchen where the bedroom door used to be, then created a new door off the living room. He also had the genius idea to extend our bedroom two feet into the living room, which allowed him to build a closet (we used to store our clothes in the boys’ room).

It was worth the minimal loss of space to gain more storage. We also hired a closet company to build a shoe closet for us. Since our room has two windows, we decided on an opaque glass door to maintain some privacy, but also take advantage of the natural light. We wanted to keep the parquet flooring, but it had been damaged beyond repair after an AC leak, so we picked a simple tile instead. In the bathroom, we wanted a clean space with white tile and walls. Our contractor sourced the bath vanity and medicine cabinet, plus our shower and sink hardware. We needed to keep a bathtub because we have young boys, and I insisted on a large piece of custom glass as our partial shower door. He warned me it might be difficult to reach around for the water control, but I insisted. It looks lovely, but he was right—it’s a bit of a struggle to help with bathtime. For the boys’ bedroom, our only directive was storage, storage, storage. We wanted to find a way to keep all of their things in the bedroom, instead of spilling out into our common living areas. Once again, our contractor came through on the extra storage front and found a way to build a second closet in their room, ensuring we lost very little floor space. Thoughtful storage options were created for toys, clothes, sports, and musical equipment. We’re not falling all over stuff anymore! Our biggest challenge was realizing that, because we were renovating the entire space, we would have to move out for an extended period of time. We didn’t initially budget to live somewhere else, so the added cost was a bit of a shock. After three months, we were scheduled to move back in and had given up the rental, when our contractor told us he was about a week behind—much of this due to some delayed deliveries of things I had ordered. We had no place to go and had to live in the apartment while there were still tools and supplies everywhere, with no appliances or kitchen counters. It was a bit uncomfortable, but not unmanageable. In hindsight, we probably should have just booked the rental for an extra week as insurance.

Working with Sweeten made us wonder what we had waited for. We were matched so quickly with a contractor, we were able to use the website to see examples of his work, we could reach out with questions and concerns, and the Sweeten blog was a huge source of inspiration.  Our new apartment is exactly what we had hoped for: simple, comfortable, bright, and uncluttered. It feels like home.

Sam and Sean renovated their home in the Clinton Hill Co-ops for their growing family.