This week, we took a swing through Park Slope for a tour of a boom-era New York bathroom that had understandably gone bust in the intervening, oh, 80 or so years. Elinor and Joel lived with the bathroom’s pros and cons and got to know it’s fickle personality well before posting their project on Sweeten, so they were more than ready to get going when we introduced them to Sweeten Expert Niki to design and build a new bath with a strong link back to its roots. Read on down for this Brooklyn couple’s take on the process of bringing their vintage bathroom into the modern era. We bought our Park Slope co-op six years ago knowing that the bathroom would have to be renovated but hoping that we wouldn’t have to worry about it for several years. The delay was partly about recovering from the process of buying our first place – which was pretty stressful – but it probably had more to do with being complete novices when it came to finding, hiring, and working with a contractor. We worried about making mistakes that could both cost us a bundle and do a lot of damage to our home.

In a 1920s building with a lot of original features, the bathroom still had a beautiful original tub and all of it’s pre-war tile. The plumbing, however, was also a 1920s original and some bad patches made over the years to the tile and fixtures were starting to fall apart. The medicine cabinet was rusty and so thickly painted that the door no longer closed. Towel rails fell off the wall. The shower started sending more water out of the tap than the shower head. And finally, the old regulator flush toilet sprung a leak that threatened a serious flood. Action was needed. 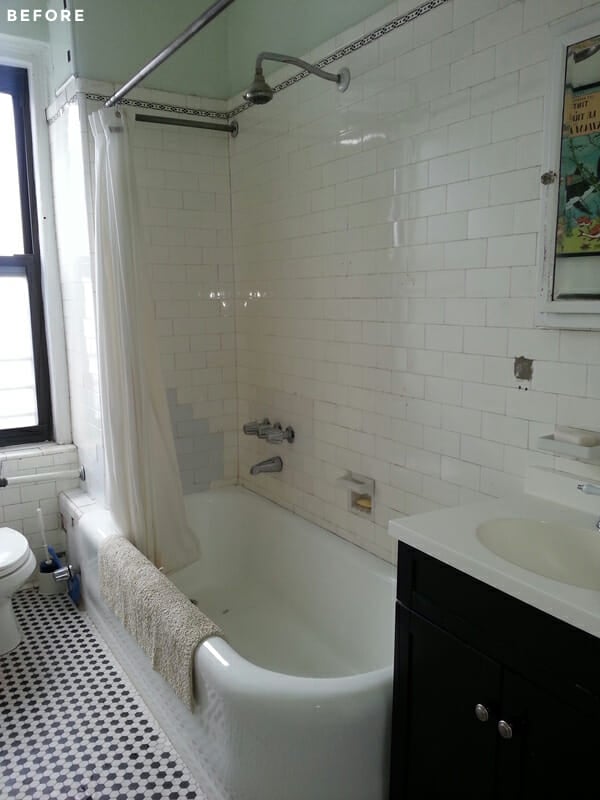 I’d read about Sweeten in an article in the New York Times and, almost on a whim, posted our project. I was surprised by how quickly they got in touch. We were introduced to Sweeten Expert Niki who had also been mentioned in the Times article and whose name I had run across doing independent research. Working with Sweeten gave us that extra confidence to move ahead knowing we had a team that had been screened, but we also liked being able to call up Sweeten to ask questions about practical things like what to expect from the estimate process and how payment schedules are generally set up. Niki’s team was a great fit because they brought design and build expertise – we just didn’t have the time (or patience) to run all over town looking at tile samples and taps and we needed someone to help narrow down all the choices.

My ideal was to somehow bring the bathroom back to its shiny, original look by restoring the tile rather than starting from scratch and replacing it all. But it quickly became clear that to sort out the plumbing and move the shower head, the wall tile would have to come down and objectively, it really was too far gone to save. With that decision made, we chose materials that were as close to the originals as possible, which meant polished chrome fixtures from Barclay (the tub filler and hand-shower), and a thermostatic control, shower head, and sink tap all from Kohler. We found a shiny metal medicine cabinet from Restoration Hardware and continued the original tile surround with classic subway tile in a soft cream finish (“bone gloss”) rather than the more modern pure white. We couldn’t quite replicate the original black and white frieze near the top, so we chose a plain black tile as a contrast trim instead — all from Nemo Tile. The original tub stayed and was reglazed; Niki and team also managed to save the original black and white floor tile. They built a new vanity with a Carrera marble top and glass pulls found on Rejuvenation, which provides a lot of storage in a small space. They also added a modern light switch and gfi outlet so that I could finally use a hairdryer without crouching by an outlet in the bedroom. Accessories from Pottery Barn, including the towel rail, glass shelf, and wall-mount light fixture fit right in with our mix of old and new. The new Toto toilet is light years beyond the its predecessor…no explosions or leak floods in our future.

The bit that no amount of research can prepare you for is how frazzled you will become: no matter how hard you try, your sense of humor will fail and you will be THAT client at some point in the process. And working with even the nicest of co-op boards will take a minimum of three months when plumbing is involved. It’s just hard to be realistic about those things up front. Niki managed the setbacks gracefully and the team worked really well with our building`s team, which is a huge help in keeping relationships friendly with your super and the neighbors.

Now that it’s done, we love our new space and every morning I can enjoy taking a shower in the new thermostatically-controlled rainwater shower. The paint color (Benjamin Moore’s “Nearly Teal”) never fails to cheer me up. It really is a shinier, happier version of its original self, minus the exploding toilet…! Thanks for this sweet recap, Elinor and Joel! We love seeing that shiny new tile just as much as we love the look of the original tub and tile you were able to restore.