When deciding whether to renovate your home, many aspects are considered. Having your budget and scope aligned and how to best manage and prepare for delays are top questions.

Another concern is finding the right renovation partner to help guide through the process and execute the vision. Here, three Sweeten renovators had these exact thoughts. They wanted their new space to match their life and design style. They wanted a trusted professional to do the job. And they needed it done sooner rather than later. They turned to Sweeten to find their contractors and get their projects moving.

A Bronx Home Transforms into a Home, Sweet, Rental Sally’s house, an attached, two-family home in the Bronx, had been in her family since it was originally built in 1993. She occupied the top-floor apartment while her sister and her family lived below. As co-owners of the 2,700-square-foot home, the siblings wanted to renovate but would do it slowly in parts based on their budget. However, Sally had decided to move out so her apartment was bumped to the top of their renovation list. The space would be updated to attract renters. They posted their kitchen renovation project on Sweeten and hired their Sweeten general contractor.

They decided to tackle the most popular space in any home: the kitchen. People are naturally drawn to a kitchen and love spending time there with family and friends. So Sally knew that upgrading her existing outdated kitchen would make the whole apartment more enticing to renters. She wanted to open up the area to make it appear larger and add more storage. She knew this would also increase the functionality of the space. The design would be simple—and create a space that was easy to maintain. She consulted with her contractor on materials that would keep her within her budget. The contractor removed a half-wall that was in between the kitchen and living space, added plumbing, and removed unnecessary beams. The space is now completely open. Aesthetically speaking, gray was the deciding color palette for the cabinetry, appliances, and backsplash. The result is a neutral, contemporary kitchen that is pleasing to all tastes and styles.

Sally’s Sweeten contractor goes above and beyond

Sally relied heavily on her Sweeten contractor throughout the process. He introduced her to a designer who helped Sally move her vision forward. He also made frequent trips to the home improvement store helping Sally search and purchase backsplash tiles that weren’t on the original list of materials. Thankfully, Sally described the kitchen renovation as uneventful. “The crew came in, did their jobs, and went home,” said Sally. “They were all very professional and came to my house to work.” And she can’t decide on just one aspect of the design that’s her favorite. She loves it all—from the storage space to the color and the functionality. The bath gets an upgrade

For Jesse and his partner Malik, their renovation came out of necessity. Their 934-square-foot condo in Fort Greene, Brooklyn, was water damaged. They needed to fix it—and quickly. “We were very concerned about drying out the place, getting the demolition completed, and covering the ‘basics,’” said Jesse. They interviewed a half-dozen contractors on their own. The couple also posted their project on Sweeten and a helpful assist with comparing all of the estimates led to the decision to hire this Sweeten contractor.

Jesse and Malik lived in the apartment for 10 years before the water damage so they wanted to take advantage of some improvements. And not just rip and replace what was originally there. For the bathroom, they added a pocket door, which was helpful to make the best use of the space. A niche was created for storage. For the shower, half of a wall was removed and a hand shower was added. The final result was a mix of contemporary forms with convenient functionalities. 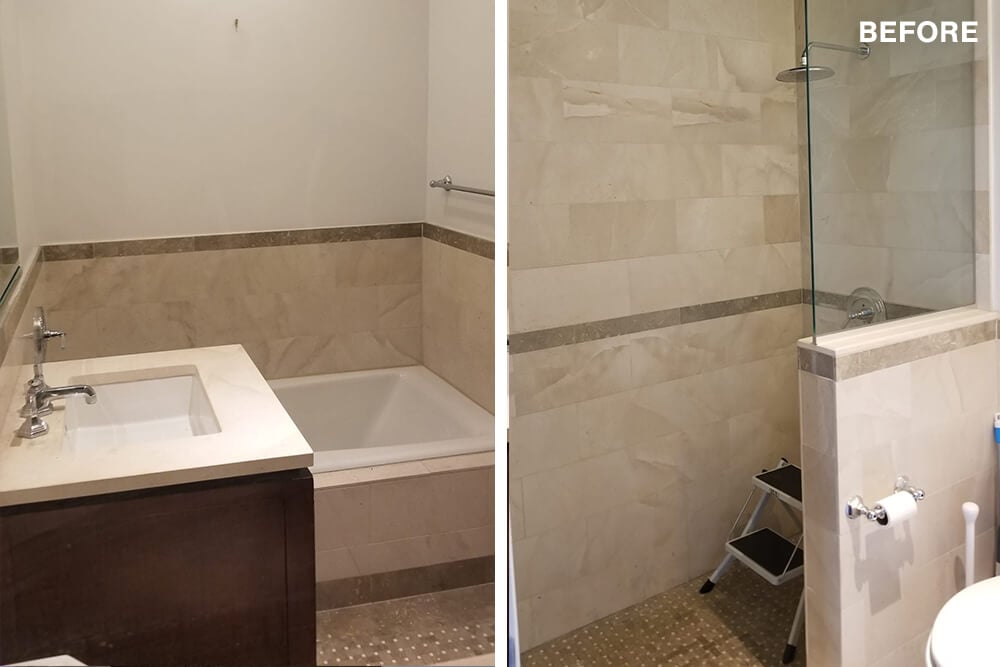 A bold and dramatic kitchen transformation

The look for the kitchen would be decidedly contemporary. Inspired by a photo of a kitchen with a matte black palette, the couple set out to put their own spin on it. Adding to the dramatic palette, a quartzite slab countertop from Brazil had some delays but was well worth the wait. “The stone really brings so much movement to the space,” said Jesse.

Despite eye-catching countertops, the cabinets were not overshadowed. The couple hired a millworker—recommended by their Sweeten contractor—who made custom cabinets. The best part? They are maple plywood with a “traceless” ultra-matte finish, which translates to fewer fingerprints. And perhaps the couple’s favorite feature of the kitchen is the waterfall peninsula. “It’s a great finishing touch,” said Jesse. Jesse and Malik found their Sweeten contractor to be a flexible partner throughout the process, offering useful feedback and working through the issues when they came up. “He understood from the start that we had a certain vision for the outcome,” said Jesse. “And he steered us to ensure we wouldn’t be disappointed.” The couple just loves that their new space “suits us and our style.”

A Tub-to-Shower Swap Shines in a Chicago Bathroom For Jonathan, a CPA and CIA, redoing his bathroom was a must. When he bought his 720-square-foot condo located in the River North section of Chicago, he knew it needed repair. But after a year of living with the outdated bathroom, he decided it was time to pull the trigger on a renovation and post his project on Sweeten.

Jonathan hired a Sweeten general contractor in his area and the work began. At first, Jonathan only intended to rip out the bathtub and replace it with a standing shower. However, his friends convinced him otherwise. They suggested that since he hired a contractor, he might as well replace more than just the tub. Jonathan agreed and decided to give the bathroom an added refresh by upgrading the tiles in the shower wall and floor as well. A subtle but satisfying change

Jonathan’s biggest question he needed advice on: What do I need to buy? For this, he turned to his general contractor who guided him on each of the materials he would need and the quantity.

The change was not drastic but it was one that satisfied Jonathan’s wish: to have an open shower look with only a glass divide—no door, no tub. The tiles on the shower wall are large-format, which visually expands a space. They are typically chosen for their modern vibe and clean aesthetic. To add texture and pattern, a gray hexagonal mosaic for the shower floor was brought into the mix. Mosaic tiles are not only pleasing to the eye but serve a functional purpose. Small tiles require more grout creating a non-slip surface.

Jonathan is happy with the way the project turned out. “I love that I can walk in my shower,” said Jonathan. “And it looks pretty!” It has gotten him thinking about future renovations. “I still have a few more projects in the pipeline!”

Sweeten handpicks the best general contractors to match each project’s location, budget, scope, and style. Follow the blog, Sweeten Stories, for renovation ideas and inspiration, and when you’re ready to renovate, start your renovation with Sweeten.