An Arts and Crafts Kitchen Built With Love

A former builder-grade kitchen gets a custom look 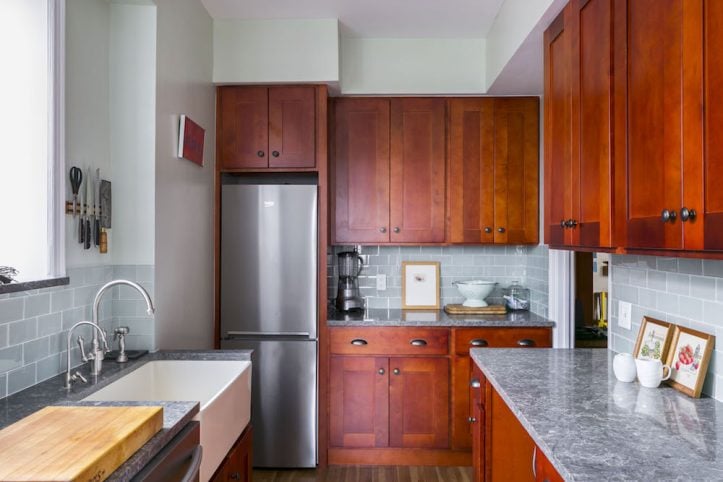 Before: Ed, a buyer for a retail department of a major New York City museum, purchased a sponsor apartment with his late wife, Kate, in Jackson Heights, Queens, nearly 16 years ago. (A sponsor unit is a unit or an apartment owned by the original owner or corporation responsible for turning a building from a rental into a co-op.) The kitchen was made up of cheap materials they knew someday they’d want to replace to fit their taste.

“We were pretty enamored by the bungalow/Arts and Crafts/Mission style, given that our building was built around the end of the ‘bungalow boom’ and the neighborhood shared a similar, working middle-class ethos,” Ed said. Otherwise, storage and the lack of counter space were a big issue for them. They came to Sweeten, posted their project, and were matched with a general contractor. After: The kitchen came together, capturing the essence of Arts and Crafts style: warm, cherry wood cabinets paired with an earthy green-blue backsplash and natural gray quartz countertops. They moved the fridge to another wall, but otherwise, the layout remained the same. A radiator on the west wall presented a minor design challenge; their contractor suggested working around it by leaving a space open beneath the countertop.

Most of the project went off without a hitch and any issues that popped up were solved quickly (or planned ahead for). When the contractor went to pick up the quartz slab for their counter, he discovered it had been damaged in the warehouse. To keep the renovation on schedule, he texted Ed photos of other, similar options he found. “What we picked actually ended up looking better,” Ed said.

The renovators hoped when they removed the vinyl flooring, the wood underneath would be in good enough shape to keep. It turned out the adhesive used to affix the subfloor ruined the fir floors. Their contractor had thought ahead though, and had a flooring supplier save oak planking just in case. Since they had such a great experience and their contractor handled every issue that popped up, Ed shared he didn’t feel the need to contact Sweeten’s Client Services.”It speaks very highly of Sweeten’s contractor assessments that nothing came up that need your intervention,” he pointed out. 1.) Have a cleaning crew lined up.
2.) If you’re renovating your kitchen, make sure you have alternative places to have your meals in mind. 3.) Make sure your contractor has multiple suppliers he/she works with. Luckily, theirs did, but that might not always be the case. While Kate and Ed worked on the plans for their kitchen together, she passed away before she could see it come to fruition. “The kitchen is almost entirely Kate’s conception,” Ed said. “It really feels like I’m living in her vision—it’s really comforting.”

Take a look at this Long Island City kitchen overhaul.