The Genius of an Apartment Combination

Zoe and Arvid put sweat—but fun!—equity into their new home When the deal fell through on a new, larger apartment, Zoe and Arvid decided to stay put in their Lincoln Square building in Manhattan and make their 700-square-foot one-bedroom work. But two years later, the cramped space won out, and they went on the hunt for a new home. Zoe, who admits to an unhealthy relationship with HGTV, dreamt of buying, combining, and renovating an adjoining apartment. They decided to send letters to their adjacent neighbors and, to their surprise, one was looking to move, so they posted their project on Sweeten, a free service matching homeowners with vetted general contractors. What Zoe, who works in finance, and Arvid, a 3-D designer, wanted most was extra space where they could spread out and finally be able to sit down at a proper dining table instead of crouching over the coffee table. For style, the couple would need to compromise. Zoe liked mid-century modern and rustic looks while Arvid preferred clean, modern lines with a dash of industrial.

The Sweeten contractor they chose to combine their apartments set out to remove the two existing kitchens, rip out old parquet-glued-to-concrete floors, and demo some internal walls to create a third bedroom. They moved into a sublet during much of the work. There were a few “must-haves” as the couple thought through the design. Since they’re a “shoes-off household,” said Zoe, they needed a storage solution near the entrance. The answer, literally, was hidden in a structural column close to where they broke through the two apartments. At first, the duo tossed around ideas about how to make the column “purposeful.” Their ideas ranged from a gas fireplace to a wine fridge. Instead, they chose “practical,” she said, and created a hidden shoe closet. “Our contractor really worked with us on hardware—concealed hinges and push-open latch—and hand-sawed the baseboard to get a wider angle for the slide-out racks,” she explained. The shoe slide-out from Elfa fit the space, and to give it a sense of design, it was painted a deep accent color for some contrast and to hide dirt on the push-open door.

The mood dampened for a moment when they found an unmovable gas riser. ‘We decided to make lemonade out of this.’ When they opened the wall that would be the spot for the dining room, the mood dampened for a moment when they found an unmovable gas riser. “We decided to make lemonade out of this,” said Zoe and thought about how to turn it into a design element. They settled on a “partition” type of structure that took the least amount of space while letting the light through. They found Blacktable Studio to walk them through the process. As a 3-D designer, Arvid took the lead on this fun project, creating the designs and submitting his sketches. The panels were delivered two weeks later. “Our contractor carefully installed the panel and adjusted the baseboard to make a seamless connection. This graphic panel is now a nice focal point that adds a lot of character,” Zoe said. They also liked the idea of having an extendable table for extra guests. “We never had a proper dining area before, so the prospect of having one definitely prompted a lot of imaginary dinner parties,” she said. 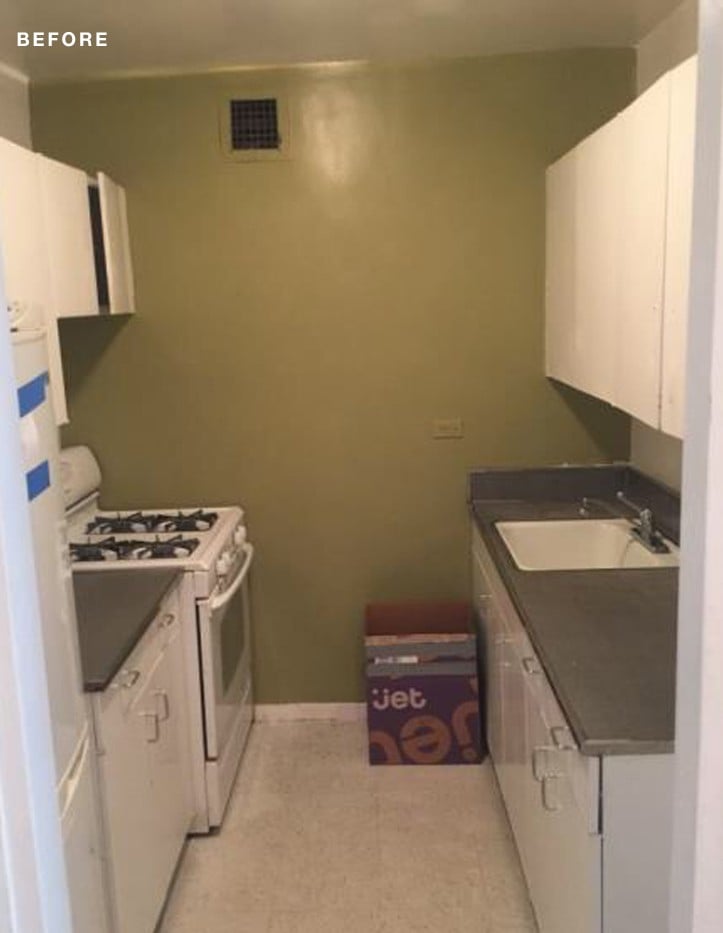 Most of the couple’s time was spent looking for flooring because it was the most prominent backdrop in the apartment and would set the tone for everything else. They wanted wide 7” to 8″ European-style planks that were not too light or too dark. Arvid spent a lot of time finding the right hue, saturation, and wood grain. “It turned into a bit of an obsessive pursuit and we finally agreed on a natural color that’s very rustic with knots and saw marks. It’s a bit of a risk, but most people seem to love it,” Zoe said. In the living room, there was an AC/radiator below the window. More than 50 years of painting had “made it a big sad mess,” Zoe said. They wanted to cover it and also make it functional. Their Sweeten contractor listened to their input, and, she said, “we just designed it on the fly. One weekend Arvid used leftover black sample paint to paint over the heating elements behind the built-in.” This created more contrast against the outside white paint. Now the built-in’s horizontal slats look crisper, and you can barely see the mechanical elements behind it.

The other detail they focused on was smart light switches. The commonly available ones didn’t look good and the modern looking ones were way out of their budget. They took a chance on Noon Home, a start-up company selling ones around $100. “We couldn’t be happier,” she said. “The product looks modern and the app works great.” To compromise their style preferences, they invented a design hybrid they called “Scandinavian mid-century” with a lot of black and white and plenty of geometric shapes. They learned the importance of taking time to plan a renovation. “Do a lot of showrooming and Pinteresting; both help you to know what you like,” Zoe said. “Once the work starts, there is little time to decide,” Zoe said. “Measure everything and live the design in your head. Know how many linear feet of closet you need and where you might store the vacuum cleaner. This is especially helpful for the kitchen design.” Zoe measured the maximum size of her pots and condiments and knew the drawer heights she needed. The only shortfall of planning too well is that you might become too attached to certain choices. She suggests being prepared for changes and understand that sometimes, you’ll have to go with the second choice. Because of some permit delays, the apartment was not ready for move-in after their sublet ended. For three weeks, they began an Airbnb-hopping adventure. “It’s a lot of stress, but we discovered different neighborhoods and lifestyles. We now know for sure commuting to New Jersey is not meant for us,” Zoe said. Living on-site for the second half of the project was a big challenge and meant being around a lot of dust and living out of suitcases. Now that it’s completed, she said their new home makes them feel “happy!”

Thank you, Zoe and Arvid, for sharing your reno journey with us.

When this homeowner came up empty in his search for a 3-bedroom apartment, he decided to combine and renovate two units in a newly converted co-op building on the Upper West Side.