A Duplex Finds the Light for First-time Renovators

In this UES duplex renovation, a kitchen banquette and an Instagram hashtag make a family home 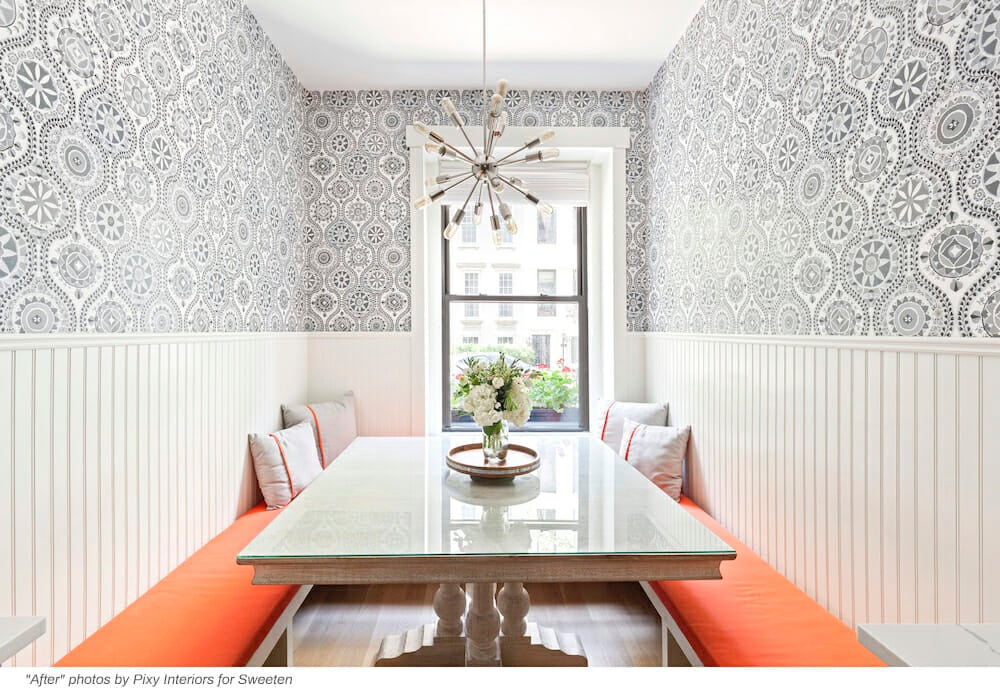 Finding a dream-like duplex in the Upper East Side

It takes just a word to sum up this family’s home-finding experience: miraculous. In the cosmopolitan stretches of Manhattan’s Upper East Side, where even the parks are tiny and concrete-dipped, Jenn and Jon, six-year-old Elliott, two-year-old Abigail, and their Cockapoo, Zucca, found a place that can only have dropped out of a dream. The 2,100-square-foot, three-bedroom duplex in Yorkville, a tony area near the East River’s edge, was in a 1910 building a stone’s throw from Gracie Mansion, the New York City mayor’s residence. The story was that decades back, a former owner of the five-floor, then ten-unit building had combined three one-bedroom apartments to create a huge two-level residence with sole access to a sprawling rear garden. “We fell in love with the unbelievable backyard garden,” said Jenn, the executive director of a family foundation, not to mention the amazing location. The problem was—and every Manhattan miracle has one—that the duplex needed renovation work.

From what Jenn and her partner, Jon, a lawyer at a bank, could see, little had been touched since the 1970s. The floors throughout were in poor condition. The white laminate kitchen was 40 years old and had an unfriendly layout. It was a daunting prospect for a couple with no construction experience, but before long, they were in contract. They posted their duplex renovation on Sweeten, a free service that matches renovators with vetted general contractors, hired their design-build firm, and jumped in. 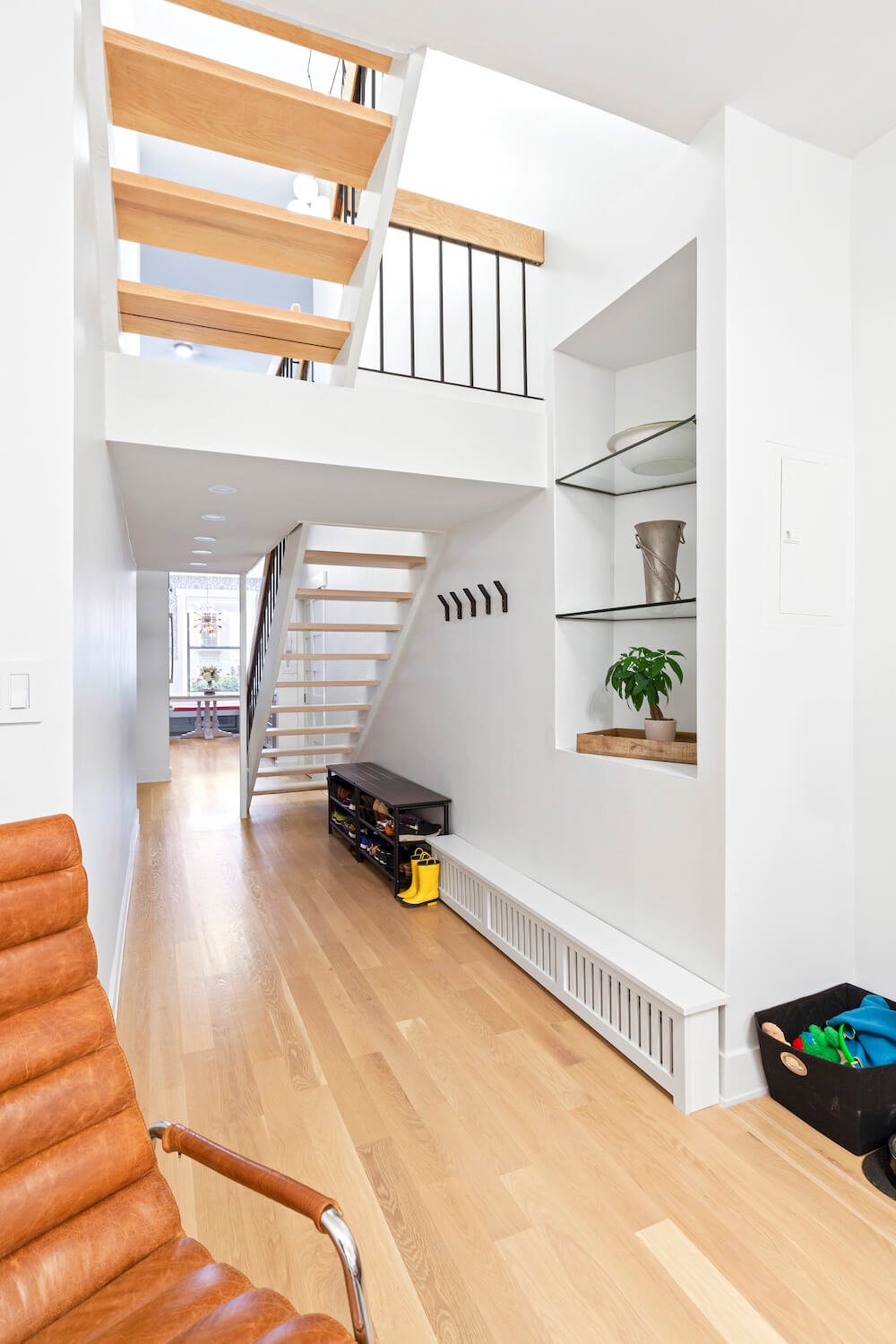 Plotting the “must-haves” for the duplex renovation

Jenn and Jon planned on four months for the duplex renovation. ‘Apartment is in good shape and does not need to be gutted,’ they’d stated in their Sweeten post. “We knew we needed a full reno on the galley kitchen,” Jenn said, “but most everything else just needed a serious refresh.” Light updates were given to the 2.5 bathrooms including the master, the kids’ bath, and a half bath.

We fulfilled it with everything from the new U-shaped eat-in banquette to the pantry, where huge pull-out drawers let the kids access their own snacks.

With the “Must Do” list finalized, Jenn and Jon got to work with their Sweeten contractor’s design team. “We wanted a transitional-modern space that was light and airy,” Jenn said. “Our look, playing off of the brand-new white oak floors we were putting in and the existing black hardware like the stair rail and window frames, was ‘black, white, and wood.’” For inspiration, they followed the Instagram #BlackWhiteWood hashtag, which delivered great ideas. 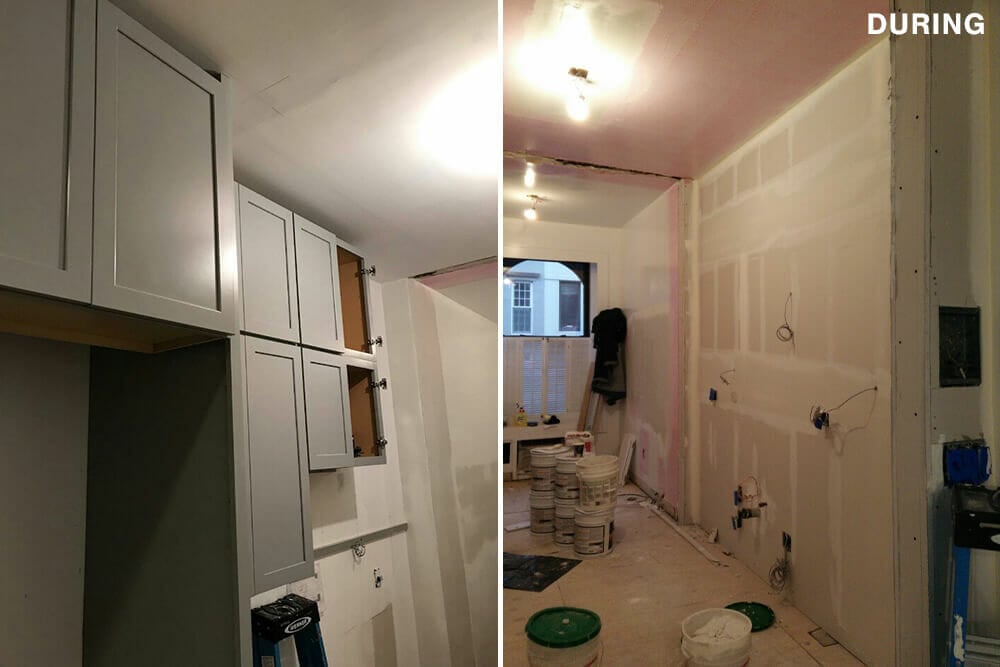 Beginning in the kitchen, they got to work on what bothered them most: not old cabinetry, but two light-blocking openings that made the galley room feel closed off. The first was a partial wall between the eating area and the kitchen. The second, on the opposite end, was a too-small pocket door inhibiting flow to the living room. “The ground floor has only two natural light sources—the front kitchen window, which overlooks the street, and the garden door to the back—so this opening up was essential,” Jenn said.

By knocking out the divisive walls, they maximized light and flow, making the kitchen a focal point of their home and family life. “Having a well-laid-out space where we can cook and eat together as a family was one of our priorities,” Jenn said, “and we fulfilled it with everything from the new U-shaped eat-in banquette to the pantry, where huge pull-out drawers let the kids access their own snacks.” In the kitchen and the apartment’s other rooms, Jenn and Jon selected materials in classic styles, like Shaker cabinets and five-panel doors, but finished with a modern flair. “We said no to crown molding,” Jenn said, “and kept the four-inch floorboards natural by sealing them with a white-infused stain.” As planned, they riffed off the existing black hardware, but mixed in metals, including brass light fixtures and stainless kitchen appliances, to relax the overall effect. They were stymied by the choices—working across so many rooms, they seemed endless. “It was hard making so many ‘permanent’ decisions over a short time,” Jenn said. They soon realized they would have to install new white oak floors throughout, since the existing ones were stained, warped, or patched with cheap flooring that had been laid down years ago. (“They were mismatched, different heights, just an overall disaster,” Jenn said.) The stairs and risers, however, were sanded and stained to match the new floors.

The radiators worked, but needed covers; the through-wall air conditioners screamed for an upgrade. The closets would get built-ins, and the family needed more shelves, nooks, and stowaways up and down. New doors and molding would be necessary. Oh, and of course they would paint—everywhere. A large bedroom on the second floor—that was once two separate rooms— would be divided again into two kids’ rooms complete with new closets in each. Their bathrooms, formerly a Jack-and-Jill with two entrances, had a wall built in turning them into two separate spaces once again.

“Jon was the one with the vision,” Jenn said. “We bought the apartment knowing it would need work to feel like our ‘forever home,’ but I was concerned going in about how much effort it would require.” They’d preferred a turnkey place but realized, having looked long and hard, that finding a comparable, renovated apartment they could afford, especially in such a prime location, would be near-impossible. And so, with a commitment to work together—because they’d heard too many stories of renovations tearing couples apart—they agreed to make it happen, in the name of a big, beautiful city home.

Getting a hang of the renovation learning curve

As first-time renovators, Jenn and Jon not only felt overwhelmed by the day-to-day, but knew little about budgets, timeframes, or permits. “We went in blind and had to learn fast!” Jenn said. Because of this, and due to large last-minute changes to the plan—including an unforeseen full-frame exterior backdoor to the garden and brand new solid hardwood floors throughout—they exceeded their budget by about 30%. Still, Jenn said, it was worth it. “Our new home has significantly impacted our quality of life. The garden, where the kids can run free, is the biggest contributor to that, but a fabulous eat-in kitchen and two floors for stretching out are big assets, too,” she said. “To us, the place lives more like a house than an apartment—we are truly in love.”

Thank you to Jenn, Jon, and family, for sharing your fantastic duplex renovation story with us!

Banquettes are pretty charming. Here’s how other Sweeten homeowners got cozy with bench seating.