An NYC Homecoming Prompts a Renovation Two decades ago, native New Yorkers Margery and Jim Fields worked in Manhattan and lived just outside the city. In 1996, the family relocated to Philadelphia when Jim was transferred for a job. The couple always had a special place in their hearts for New York, and when their kids grew up, they decided it was the right time to return. When they began their search for an NYC home, they wanted something a bit unique. They looked at many listings, but it was the view from their apartment at the Clinton Hill Co-ops (a Brooklyn complex near and dear to us here at Sweeten, after renovating so many homes there!) that sold them on the one-bedroom place they ended up purchasing. They loved the sweeping view of Manhattan—the island that drew them back to the five boroughs. The apartment itself was a different story. It hadn’t been updated in 40 years and had been chopped up with too many walls. Despite this, they decided that the incredible views were worth the trade-off of having to renovate. After a remodeling of their Philadelphia kitchen several years ago, they had a good idea of a wishlist for their next project. They wisely decided to live in the space for six months before starting the design process to get a feel for how they would use it—and to understand the light’s effect in the apartment at various times of the day. They heard about Sweeten, a free service matching homeowners with vetted general contractors, from their neighbors, and it kept coming up in conversation. They posted their project and chose this Sweeten contractor, who had previously done several projects in the Clinton Hill Co-ops. Once discussions got underway, they made some decisions with the help of their Sweeten contractor; prior work in the building meant he knew what was behind the walls and what to anticipate, so was able to guide Margery and Jim on what actions would need to come next in the process. He knew the bathroom ceiling was a drop ceiling and would be able to install the spotlighting they wanted. Their contractor was also familiar with the building’s wiring and informed them it would not support an induction cooktop.

The couple’s design vision was an industrial-yet-modern aesthetic. They wanted to take down the walls boxing in the kitchen and allow as much light into the space as possible. The full scope included a new kitchen and bath as well. Initially, Margery and Jim planned to convert the dining nook beside the kitchen into a second bedroom but ultimately decided on a flex-space solution made possible by sliding doors. When they didn’t need the second bedroom, the doors could remain open to take full advantage of the two large windows in the nook. The contractor created a custom solution by fusing two estate-sale-find French doors that Margery and Jim had found to make a sliding pocket door. The renovated nook is now a seating area that can be closed off from the living room to create a guest sleeping area that feels like a “studio within the apartment,” explained Margery. It is also a cozy spot for guests to perch when the pair entertain and are preparing food in the kitchen. (Given that Jim has seven brothers who are all married, they definitely need the seating for guests!)

For the kitchen revamp, Jim and Margery decided on dark gray cabinets paired with a light quartz countertop and glass subway tile. The contractor suggested a full-length pantry next to the refrigerator on the wall separating the kitchen from the living room, providing unexpected bonus storage. On the other side of the fridge, open shelving is built onto a mirrored backsplash for maximum light reflection into the kitchen. Corner shelving was added, with a Lazy Susan to maximize under-counter space leaving enough room for a full-size dishwasher. 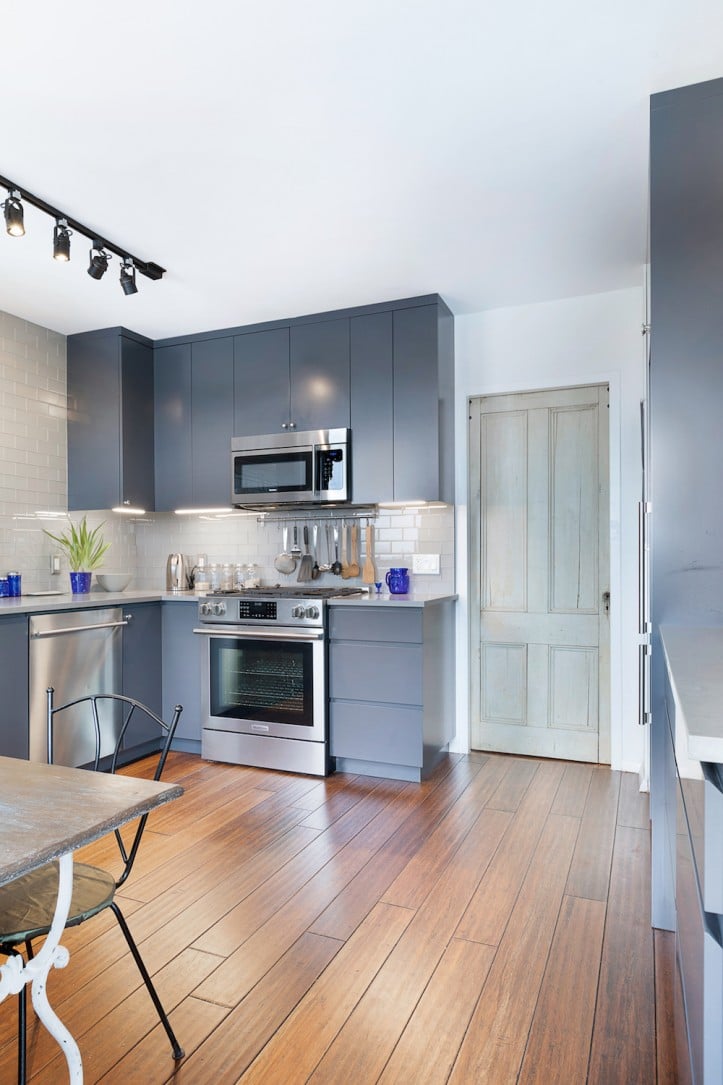 The couple intended to add a kitchen island at first. But when they saw how open the space felt without it, they chose to leave it as is. Similarly, the original design called for stainless steel shelving to be added to the back wall above the sink but decided to leave it open for an airier feel overhead. In the bathroom, Margery and Jim were able to make use of another estate sale find—the black large-format tiles, which cost a dollar a piece. They paired those tiles with an unusual bronze penny tile Margery had once seen and admired in a restaurant. A cast-iron tub was swapped out for a vinyl one that allowed the contractor to bring the wall tile around the front to tie the space together. Modern Brizo fixtures helped to finish the clean, streamlined look.

Now that their project is complete, Margery and Jim have a few words of wisdom for would-be renovators. They stress the importance of selecting the right contractor—one with whom you can have a good “communication cadence,” said Margery. “We would text or talk to our contractor multiple times a week, or multiple times a day as things came up. That ability to instantly communicate would keep things from being delayed or misinterpreted.” They love the openness of the new layout, “while keeping some separation between the kitchen and main living space,” said Jim. “We’re glad we didn’t take out the bar/pantry wall.” Check out their Behind-The-Reno video below:

Welcome home, Margery and Jim, and thank you for sharing your lovely Clinton Hill apartment with us!

Mario and Joe renovated their Clinton Hill co-op, updating the kitchen to create a larger and brighter space.