“I had my entire bathroom ripped to the studs – my Sweeten contractor took complete care to protect my apartment, which felt really respectful to me as a homeowner.”

At first glance, Marissa’s bath renovation looks as straightforward as they come: builder-grade fixtures and dropped ceilings, all aged over three decades, ripped out and replaced with gleaming tile, high-drama lighting, and old New York details. One look at the before and after photos and you would think you have the whole story. But, this before and after hides three surprise design decisions, and a little magic up the homeowner’s sleeve, that changed the game for this Prospect Heights bathroom.

Marissa bought this one bed, one bath co-op in 2012 with a bathroom that had not been touched since the building went co-op in the early eighties. The previous owner lived elsewhere and didn’t realize that leaks were causing damage throughout the room. Worse than the leak issue, the dropped ceilings drove Marissa nuts; she had seen a neighbor’s identical apartment that did not have the low ceiling structure and was convinced that the ceiling height had been a cost-saving measure and not an architectural necessity.

Marissa posted her project on Sweeten hoping to find a contractor who would trust her instincts and find creative ways to make the space more functional and beautiful. We sent this Sweeten general contractor her way to clear out the dropped ceilings, re-tile, and add smart storage options throughout the bath. We knew he could nail this project, but we didn’t know that Marissa, who now works in financial services, spent years working in theatrical lighting and had big ideas about how to solve the problems of a teeny bath.

Her contractor and Marissa agreed to have a go at the dropped ceilings that hovered over the tub and sink. Worried that they might conceal pipes or wiring, he was careful to warn Marissa about the possible budget implications of removing the drops if they turned out to be strategically placed, but both were psyched to find out that they were totally unnecessary. Marissa was thrilled to reclaim the extra ceiling height throughout the room and turned her focus to paint, tile, and fixture decisions. Marissa worked off-Broadway for six years as a lighting designer and brought a black-box theatre approach to her bath renovation. Marissa knew that one trick to making the most of a windowless small space, devoid of natural light, is to paint it a very dark color because that move can make the walls and ceiling feel like they are receding. Happily, that magic also aligned with Marissa’s love for the Beaux Arts, old-New-York-glamour of the building, and established a foundation for the design direction Marissa was taking.

To create contrast with the black paint, Marissa felt drawn to white subway tile, but didn’t want to be surrounded by anything that reminded her of the actual subway. She chose a beveled white tile as a higher-end finish that would reflect light and add texture to the clean lines that the contractor’s team was carefully laying. For an extra touch of texture and contrast, he helped Marissa find a black rope tile border. I love this detail – gleaming but still understated. Even as they created a very specific look for the bath, Marissa was careful to keep the retail value of her home in mind: the expensive tile work is classic and will appeal to any buyer, while the daring paint choice can easily be reversed if the next owner wants a more neutral wall.

To create a glow, Marissa chose vanity sconces that cast light up and around the room and found a small white chandelier that adds dramatic decorative charm, without being overly girly or glittery. To make the most of her budget, they made smart decisions about what to salvage and what to strip. Marissa left all of the plumbing in place, kept the cast-iron tub, and incredibly, made do with the existing under-sink storage (painting it black to hide the wear and re-directing that expense to lighting and storage details).

Her contractor removed four layers of floor tile and helped Marissa find this classic black and white tile in the spirit of a period-specific basket weave that Marissa originally envisioned but couldn’t track down. The team also lined the new floor tile with gray grout to help Marissa keep it spotless.

Marissa went with a new Toto toilet and reflective silver fixtures, both high impact and functional choices that make the new space feel finished and bright. 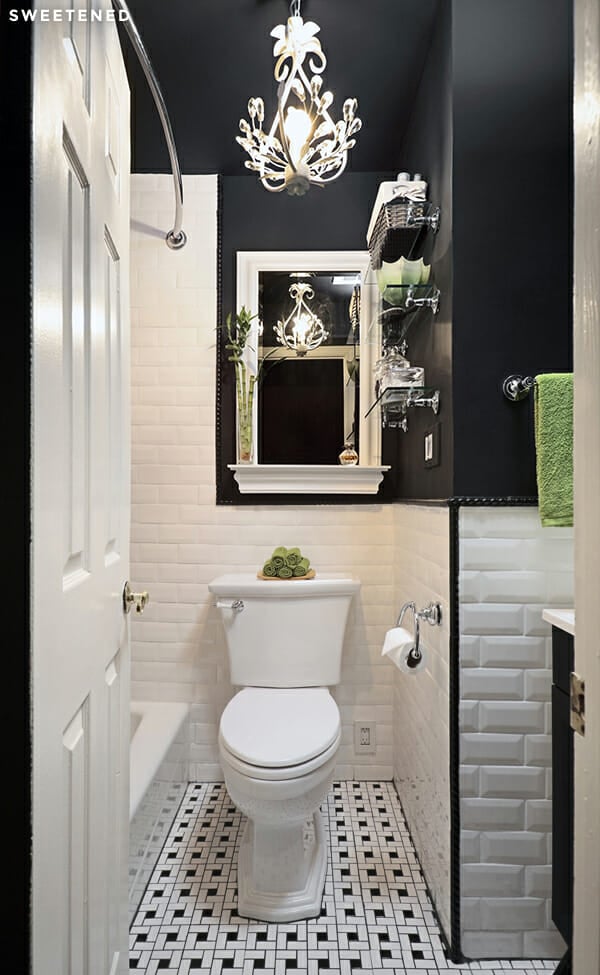 Would Marissa’s design secrets work in your New York bath? Post your project on Sweeten and choose a Sweeten Expert who can create a space you will love. Thank you, Marissa, for sharing your incredible lighting and color expertise with us!