An 88-Year-Old Bath Gets Its First Facelift Project: Turn an old, run-down bathroom into something elegant and calming

Before: Mary Ann and Frank’s three-bedroom Upper West Side apartment had done its job since they had bought it in 1992.  But now, with their two kids grown and gone, the couple pulled the trigger on a long-planned master bathroom upgrade. “Our co-op building was built in 1929 and it was the bath from 1929—same tub, same tiles,” said Mary Ann, who works in publishing. Grime on the tiles wouldn’t budge and some tiles were no longer there at all. Paint peeled off the walls and with no vanity, shampoo bottles were always on prime display.

After: To keep the costs down, the couple kept the original layout. But that was all they kept. What they wanted was a stylish sanctuary beginning with a hex tile bathroom. Hexagons were laid on the floor and marble topped off the vanity for a refined look. The shower also has matching marble tiles. Their Sweeten contractor suggested painting, not tiling, the wall opposite the shower and vanity. Rather than feeling enclosed, the bathroom now feels “more like a room,” said Mary Ann, “and plus it would have been a lot of cleaning.” They did lose storage space in their master and hall bathroom, which they also renovated. However, a large vanity and two large mirrors with storage built into the wall that were added to the master bathroom made up for that. When you open each mirror, there is also another magnifying mirror. The vanity has six large drawers and two cabinets for storing toilet paper and cleaning supplies. “We were just going for a more calmer, less cluttered look,” said Mary Ann. “Now, everything is put away.”

Bonus: Mary Ann’s centerpiece is a walk-in shower so large “you can do yoga in it.” The old tub was decommissioned and replaced with a walk-in shower with glass walls. “It’s so much fun to take a shower now,” said Mary Ann. 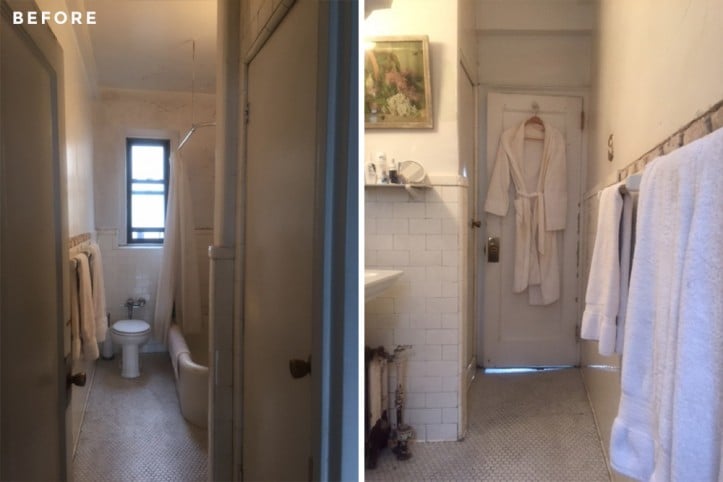 Take a look at these clever bathroom storage ideas.