A Guide to Glass Shower Doors The shower has, at last, stepped up next to the tub—separate and equal—to become a focal point in the bath. However, there’s more to a fabulous shower experience than a multi-spray shower head and pretty tiled walls. You will also want to consider the shower door, which sets the tone for the shower’s overall appearance and harmony with your bath’s décor.

Spa-like and almost invisible? Check. Framed and architecturally attention-worthy? Check. As you research and shop, you’ll find a shower door to suit every bathing enclosure and décor. Sweeten, a free service matching renovating homeowners with vetted general contractors, surveys the factors involved in selecting a shower door to better inform you as you research this important feature.

You may decide to place the shower next to the tub because it looks nice, or because you don’t want to make major changes to the water lines. Perhaps you only need a shower in a space with limited square footage, so you want to put it in the corner. Wherever the shower ends up, your design will require one of the following door mounting options:

The style you choose can be based mostly on your taste. However, before committing, you will want to consult with your contractor to assess the bathroom space for quirks. After all, not all bathrooms are made alike: dimensions vary from ceiling to floor, plumbing lines wander, walls and floors are not always plumb. Your contractor can help you determine the best location for the shower, including making sure that the walls can bear the weight of frameless shower doors. 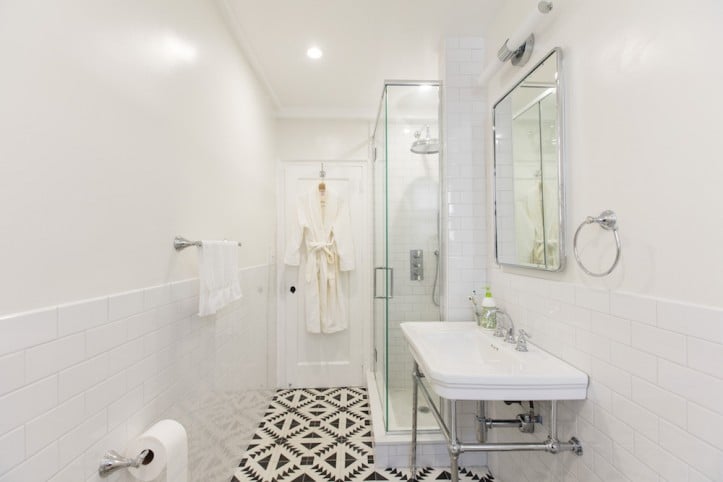 The door you select will depend not only on your preferences as to the style and movement of the door but also any space restrictions. Is there room for the door to swing open? Or can the width handle sliding doors? Placement of controls on one or two walls and the width and height of the shower enclosure will also factor in. Consider the following options:

Two panels fit in a frame and slide in either direction to open and close. A single pane attached to a wall swings open from the left or right.

One narrow pane is fixed to the wall while next to it, a panel is fixed with hinges to the other wall and operates as the door. Two equal-size panels are hinged at the center to open inward.

A single pane of glass attached to the wall holding the showerhead protects the bathroom from splashes; the rest of the shower opening remains uncovered.

Once upon a time, framed was the only way to go. (Remember those shower doors when you were growing up?) With the widespread popularity of open design, semi-frameless shower doors and frameless showers have caught homeowners’ attention. Improvements in mounting systems, including thicker glass supported by sleeker, stronger hinges, means you can have a shower that seems to float or even disappear. Your choices come down to four solutions:

This product features a metal frame around all four edges of the operating doors. In addition, metal channels framing the shower opening allow for hinges that attach swinging doors or the gliding motion of sliding doors. Framed glass doors are created to fit standard shower openings. The appearance doesn’t have to be standard, though. Manufacturers offer a range of looks, from super contemporary clean-lined chrome to matte black in a windowpane pattern from Coastal Shower Doors that will conjure your own private Downton Abbey. Duravit makes a glass enclosure with two self-locking doors that fold against either wall when not in use, so the shower disappears entirely.

Special details notwithstanding, framed doors can be the thriftiest way to go and the easiest to install. The glass panes are typically 1/4-inch thick Semi-frameless shower doors may include framing around the entire shower opening, but not around the actual door panels. It also typically features 1/4-inch glass. Semi-frameless doors lend themselves to some creative trends in headers, like exposed industrial-style hardware with rollers and bars that suggest barn door hardware.

Not completely without hardware, frameless is still the way to go if you want an open, seamless, truly spa-like effect for your shower. Advances in hardware engineering and glass manufacturing make this type of installation appear to float. Glass panels attach to hinges that then attach to walls. There is commonly a combo of a fixed panel and a swinging door, both made of 5/8-inch safety glass. Besides the hinges, the only hardware is the door handle and possibly a towel bar, though after going to all this trouble, why would you want anything to block the view? At the very high end, you will find freestanding shower enclosures. They consist of a shower pan with a four-sided metal framework in which glass panels fit, one of them a door. Drummonds, an English manufacturer, makes several models for the United States market. If you can afford the hefty price tag, you can have this shower up and working in a couple of hours.

Finally, you will choose a finish for the frame and its accompanying pieces—hinges and hardware. A good rule of thumb is to choose the finish that matches your shower head and any other shower fittings, like a hand shower or jets. Of course, the choice is up to you, and here, too, is a range—brushed, nickel, oil-rubbed bronze, and ever-popular chrome.

All edges of your shower door should arrive finished or polished. Styles for the appearance of the flat surface include:

A holdover from the previous century, opaque shower doors are good for those seeking privacy. Ask to see a manufacturer’s offerings in this category, which can range from pebbled to brushed to the appearance of raindrops.

These remain a strong trend in bathrooms. Rightly so: they promote the open appearance in a bath while showing off sleek shower fittings and surface treatments of tile or stone.

These are created during the manufacturing process and come in subtle, natural tones like gray, bronze, and blue. As a bonus, they complement America’s favorite bathroom color—white—as well as stone, tile, and metals for faucets and showerheads, and controls. Etched glass shower doors permit privacy with opaque designs etched onto clear glass. Patterns available can be figurative, like images from nature, or abstract. Custom designs will cost you more and must be specially ordered. The etching is on the outside face of the shower.

The less framework for the door, the thicker the glass. Standard glass shower doors come 1/2- or 3/8-inch thick; frameless doors should be 5/8-inch thick. All must be made of safety glass, which shatters into small pieces when broken, not into lethal shards.

The shower door—a seemingly small yet often overlooked feature—makes a huge impact on the look and feel of your bathroom. As you make your decision, think about how you shower, and what’s important to you as you experience your daily bathroom rituals. You want the shower to feel like it’s part of the of the bathroom. The right glass shower door can do that.

Turn your shower into an at-home spa with features like body sprays, steam, and more!