Renovating in the West

What to Know When Building an ADU 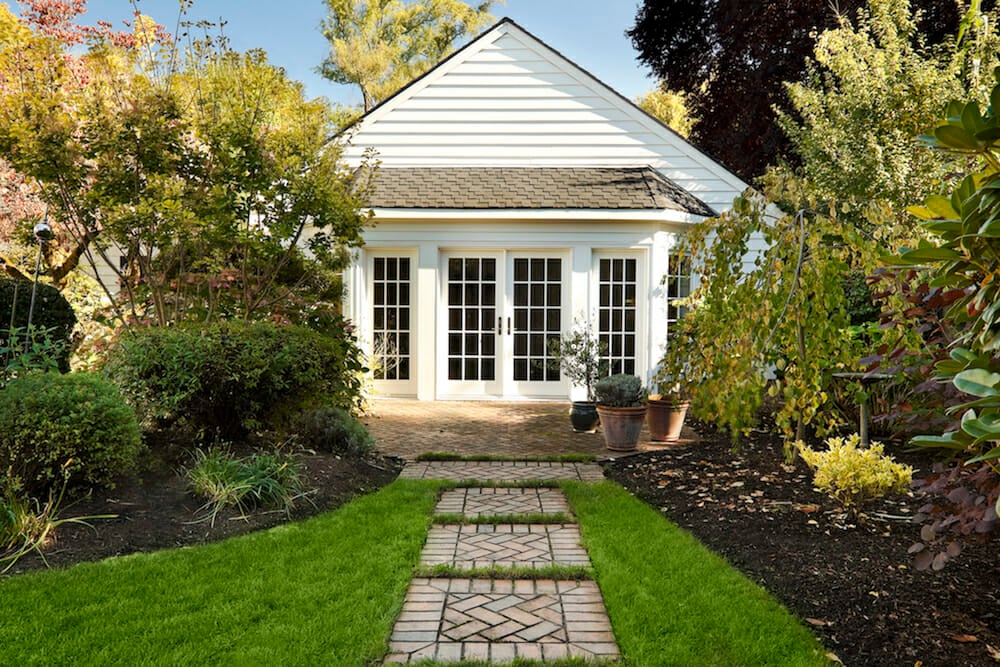 One of the hottest properties in Los Angeles real estate right now is the ADU (or Accessory Dwelling Unit). These small and often self-contained units on lots with single-family homes, whether built from scratch or transforming an underused garage, are reimagined as in-law spaces (aka the granny flat), short-term rental units, home offices, private yoga studios, and more.  Sweeten outlines what you need to know about making the most of your property.

ADUs have the potential to increase property values and generate income for homeowners while providing a solution to L.A.’s housing shortage. “If you’re thinking about a long-term strategy to offset the cost of your house or renovation,” says Sweeten founder and CEO Jean Brownhill. “ADUs can provide a potential revenue stream in terms of rental space.”

With a few key law changes in recent years, the Los Angeles Department of City Planning saw a 15-fold increase in ADU permit applications in 2017. As of September 2018, almost 8,000 property owners had ADU conversion or building permits submitted to the department.

Here’s a guide to get you on the ADU bandwagon:

What is an Accessory Dwelling Unit (ADU)?

“It is increasingly coming up as an interest, either as a standalone project or rolled into a bigger renovation,” Sweeten architect Jordan said. His architectural firm currently has a few ADUs in the works, including a project in which the client is adding a self-contained unit for a family member while rebuilding the main house following a fire.

Depending on where you are and who you ask, the definition of an ADU can differ in details, but the gist of it remains the same.

The Department of City Planning for L.A. describes an ADU as “a self-contained housing unit located on the same property as a single-family home.” UCLA’s CityLab, states that it must include amenities such as a kitchenette, bathroom, and living area as well as a separate entrance.

California’s Department of Housing and Community Development puts the square footage of an ADU at “generally up to 1,200 square feet.” However, some cities have that square foot maximum at much less, such as 650 square feet for the City of Santa Monica and 600 square feet in Glendale. So, it’s worth becoming acquainted with how your local area defines an ADU.

While many Angelenos are incorporating bathrooms and kitchens into their ADUs, others drop them to keep the project simple with a minimum price tag and instead use them as a private gym or office. “More people are working from home, so having a workspace that is separate from the home is a big advantage,” Jordan said.

These units can either be attached to the main residence by adding a self-contained unit and another entrance or detached, so a completely separate structure to the house. Homeowners have converted their garages or pool houses into ADUs or built a second story on the garage to accommodate an ADU. In other words, there are many ways to interpret what an ADU can look like for your property.

Why are ADUs so popular right now?

In 2016, California passed a statewide law that made building ADUs or converting an existing structure into one, a lot easier. The new law requires all local governments to allow ADUs in all areas zoned for single-family use.

Rules governing mandatory off-street parking, a major hurdle for potential ADUs, were also relaxed. Now, on-site parking is not required if the property is within a half-mile of a bus or train station, or if it is located within one block of a car-share vehicle, according to CityLab’s guide to building an ADU.

At the beginning of 2019, the state of California passed another ADU-friendly law. Those homeowners who illegally built ADUs without permits now have the opportunity to make it right without penalty. As an added bonus, the illegal ADU will be measured against the building standards that were in effect at the time the structure was built. These statewide laws were either adopted by L.A. counties or modified by certain municipalities, so make sure you check out what it means for your property.

“The state made a mandate that every building department had to come up with their own streamlined process for approving these projects,” Jordan said. “It needed to be easier than permits for building a new house or a major addition.”

There is a chronic housing shortage in California. In L.A., sharp increases in real estate values have made that shortage dire. The ADU has been billed as a solution to this. A pilot program is also underway to help build a small sample of ADUs that will house those who are homeless.

Not only is an ADU an additional home for a single person, couple or young family, but the small living space translates to lower rent. This either keeps residents in a neighborhood they would otherwise be priced out of or provides a home for a young person or student on a small budget. ADUs also generate income for homeowners, taking the pressure off mortgage repayments.

But it is not all love for the ADU. Some L.A. residents have voiced concern that an influx of granny flats will change the nature of neighborhoods. Since on-site parking is not a requirement in some areas, it could increase pressure on-street parking as well.

Some Angelenos also use their ADUs for short-term rentals on sites like Airbnb, sparking debate over how the community benefits as a whole. While this can create more income than long-term rentals, it doesn’t abet the housing shortage for those who call L.A. home. Some areas, especially those heavy with Airbnb rentals like Santa Monica and Long Beach, have banned short-term rentals in many ADUs. Can I build an ADU or convert my garage into one?

If you have a single-family home and enough space, there’s a good chance the answer to that question is yes, thanks to these new laws. Sweeten contractors have not seen many obstacles preventing people from moving forward with this.

However, to be certain, it is best to consult with a building professional who knows your area and knows ADUs. For a detached ADU, the structure needs to be at least 10 feet from the main residence and five feet from the property lines, Sweeten contractors Anna and Vahik said.  If you choose to go with an attached ADU, or a lack of space compels you to, the new addition must be less than 1,200 square feet or the maximum your area allows. It must also be smaller than 50 percent of the existing house, according to CityLab’s guide.

A snag that has tripped up many prospective ADU owners is powerline clearance. According to Curbed, at least ten percent of the about 8,000 pending applications have this issue. There must be 15 feet between any residential structure and the lines above. L.A.’s Department of Water and Power is strict about this and will not even give a few inches, as their primary concern is safety from downed lines.

Netanel, a Sweeten contractor, had one Santa Monica client run into this issue and had two options: either spend several thousand dollars to move the lines, or skirt the 15-foot requirement by removing the kitchen and bathroom from the ADU plans. The client opted for a workspace instead of a fully contained unit.

And even though ADUs are small, Title 24, which covers energy conservation and green design, still applies as does seismic standards for earthquakes, architect Jordan said. (More on Title 24 here.) There is also talk of banning ADUs for some hillside neighborhoods that are particularly earthquake sensitive, Curbed reports.

ADUs sound great. I want one. How much will it cost?

Sweeten general contractors have worked on projects that range from about $50,000 to over $200,000, with plenty in between. A major factor of how much your ADU will cost will be based on what you have to work with—for example, are you converting a garage that is close to electrical and plumbing hookups?—as well as what bells and whistle you want.

The project that came in around $50,000 was a garage conversion completed in less than three months by Netanel. “The owners used the existing floor so they didn’t need to do as much to the interior,” he said, adding that the connection for the plumbing was close by, further lowering the cost.

If you are planning a garage conversion, the state of your garage will play a big factor in project cost. Is there drywall? Are there any utilities? If there are, do they need to be upgraded to support a fully-contained unit? Does the roof need replacing? “A garage isn’t always something that homeowners focus on because it housed their car,” explained Jordan.

Another customer of Netanel’s went for a higher-end ADU, which cost well over $100,000. The walls needed to be fully insulated and plumbing and electrical connected. It also had some luxe elements like marble floors and walls in the bathroom, a free-standing tub, and custom cabinets for the kitchen.

Another factor to consider is the style and finish of the original home on the property. “If the original house is a high-end property, then the ADU has to correspond,”  Sweeten contractors Anna and Vahik said.

Getting started with your ADU remodel

Whatever way you slice it, an ADU can add to your lifestyle as a home office, fitness studio, or meditation room while adding to your property’s value. The monetary benefits only increase if it is a self-contained unit that you choose to rent out.

When you’re ready to get started on your kitchen or home remodel, work with Sweeten to renovate with the best contractors.

What does ADU stand for?

ADU stands for Accessory Dwelling Unit. This is a housing or living unit separate from the house, but it is on the same property as the single-family home.

What is an ADU?

ADUs are single space structures that are often used as an office space, an extra bedroom, or a living area. Some ADUs are used as in-law suites, others are unused garages. ADUs can also be built from scratch. ADUs can be used as rentals for people looking for a long-term or short-term stay, which provides the homeowners with bonus income, and can increase property value.

How much does it cost to build an ADU?

Sweeten projects involving renovating or adding an ADU have ranged from $50,000-$200,000. General contractors have noted that the cost all depends on the changes or additions that are being made. For example, if plumbing work is being done, it will increase your costs significantly. Plus, all of the shiny features that homeowners may want will make the price higher as well.