One of the main points to consider when planning a renovation is how you’re going to minimize the disruption of daily life. It can be tricky if you are updating a kitchen or bathroom. Living without some elements will make surviving a renovation tough (running water, electricity, Wi-Fi), so moving out while work is being done is probably your best option. But if the renovation won’t affect your needs in a major way, then you might be able to stay.

Moving out during demolition Carly had been looking—and saving—for years to buy an apartment of her dreams. So when she found this 500-square-foot co-op in Greenwich Village, she snapped it up. It was a studio with a  lofted bedroom and balcony—what more could she ask? It did need work, however. She wanted to literally raise the roof in order to enclose the loft bedroom and redo the kitchen. The entire renovation took five months.

In the interest of surviving her renovation, Carly decided to move out during the messiest part of the process: the demolition and raising the roof.  “For much of it, though, I was there,” said Carly. “I had no kitchen for six months and lived out of suitcases.” But she doesn’t regret “slumming it.” “The money I saved on short-term housing enabled me to buy the gas stove of my dreams!” 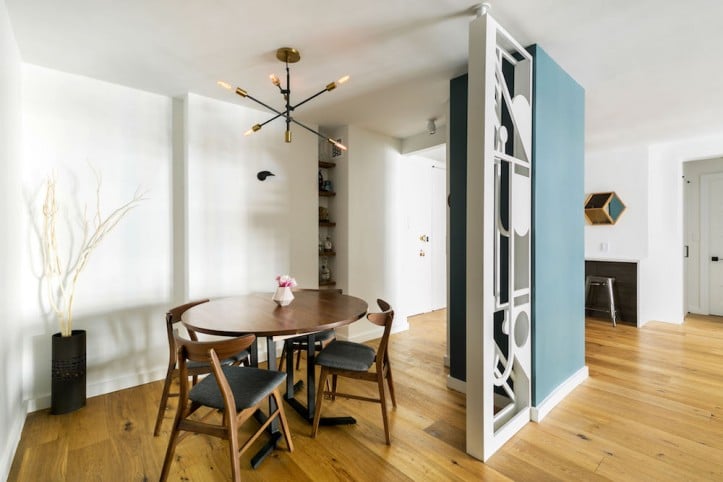 (Above) Zoe and Arvid’s apartment combination

Combining their apartment with the unit next door eliminated the option of living at home when work began. Since the scope of work extended beyond demolishing walls and the two existing kitchens to build a new one,  Zoe and Arvid moved into a short-term sublet. The couple embarked on an Airbnb-hopping adventure when their lease ended before the work was done. They then decided to live on-site for the second half of the project. (Above) Lindsay and Roger’s updated kitchen

Renovating the kitchen while nine months pregnant made getting around the apartment a challenge for Lindsay. “You think you can live through it for a week or two, and then realize how long a week or two really is. It would have been a nice break to go somewhere where there wasn’t dust and tools and boxes everywhere,” she said. To make it work, she moved everything from the kitchen and living room into the nursery. For future renovators, she recommends going away for a weekend during heavy construction.

Surviving their renovation: A couple toughs it out Sharon and Laurence lived in their Financial District apartment for more than two decades before renovating their bathroom. They previously had remodeled their kitchen but were wary of redoing their bathroom. The couple only has one in their apartment so they thought it being out of commission would be tough. Sharon and Laurence ultimately decided to stay in the apartment during the renovation. It wasn’t ideal but they used a neighbor’s apartment for bathroom access. Sharon thought it was better to be living on-site to deal with potential issues quickly and efficiently.

Moving into a rental (Above) The light-filled renovated living room

For their family of five, these homeowners wanted an open and airy space. That meant renovating their Upper West Side home, adding another bedroom and bath. They also knocked down walls and updated their kitchen. They turned to Sweeten to find a reliable contractor.

The couple decided to take their three boys (and two dogs) and move into a rental while the work was being done. “When I told our Sweeten contractor that we wanted to move back in before the apartment was completed, he worked with us to allow us to do that. Even though we lived there without a kitchen, there was no question that it would be worth it in the end.” (Above) Nikki and Chris’ apartment renovation

Nikki and Chris had to get creative to manage the challenges of being in the space mid-construction. “Through this experience, we showered at our friends’ homes, brushed our teeth at local coffee shops, and ordered from Seamless four times a week,” Nikki said. But it was all worth it to see the daily progress and watch the couple’s vision come to life. The routine became so natural that the couple’s pug started waiting at the door each morning to greet the contractor’s team when they arrived.

Surviving a renovation (whether remaining in or leaving your home) is an important decision. We’ve outlined the pros and cons of sticking it out vs. moving out during your renovation.