This week’s guest post is more of an epic saga. An architect in Union Square came to Sweeten to find a general contractor for an ambitious wall replacement project — straight from her newly light-filled Manhattan loft, Samina tells the story of a home renovation that was 15 years in the making. After twelve years of living in a Union Square loft with unsealed and stained windows that wouldn’t open (and following a year-long process of dealing with Landmarks Commission permits for work in a 19th century building), we were finally at installation week for new windows in our apartment!

To prepare, we had to have some interior shelving removed and a bit of wall board was damaged in the process. I made a split-second decision to remove the wall surrounding the windows because there had been some troubling leaks in the past, and I wanted to make sure that the quality of the wall matched the quality of the new windows. Little did I know that what I would discover in the next few hours would kick off a nearly three-year exterior building wall remediation project, for which we had no more than a thin sheet of copper separating us from the outside. Needless to say, those were some cold winters… After this huge setback in 2012, we managed to get our new windows up in 2014 and we were given the go-ahead by the building to finally rebuild our interior wall in 2015. As a licensed architect, I understood the technical side of the work, but I still needed a contractor who would be detail-oriented enough to follow my drawings and work with me on issues that arose during the construction. I reached out to my professional network but the demand for high-quality contractors made it difficult for me to engage someone on my small project. In my web searching, I came upon Sweeten. I was reassured by conversations with Sweeten’s team, who, after listening to the particularities of my project, suggested a couple of matches. My husband was the first to meet Sweeten Expert Nick while I out was out of town, and he was impressed with Nick’s positive reaction to my detailed drawings. When I then met Nick, it was immediately clear that we had a great rapport. He quickly identified the most critical elements of the project. I was surprised at how Nick appreciated my drawings and welcomed that level of detail. Many contractors want to change how drawings are done to suit their own needs, but Nick ensured that the details were covered.

I wanted to achieve a clean and refined but also warm aesthetic that would complement and add to the exposed brick of our loft walls. I was also determined to insulate the wall properly and create a continuous air barrier that would reduce thermal transmission. In addition, we needed to repair a broken radiator and pipes that had exploded during the previous winter when the wall had been exposed and un-insulated, and we needed to incorporate new electric wiring and re-mount automated shades that we’d installed before but were now disconnected. 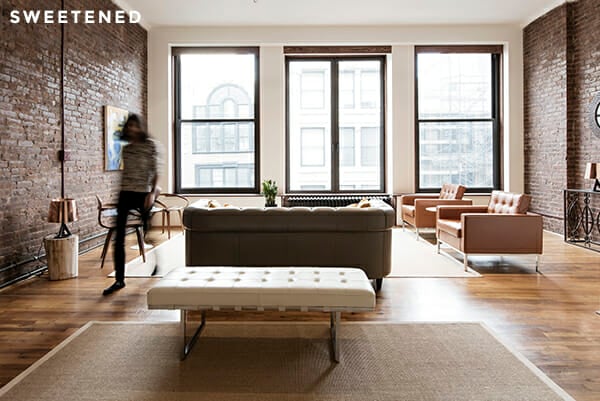 Architecturally, there were many different “planes” to resolve: the wall’s center bay extended beyond the side windows and the sills of the side bays were higher than the center bay. Plus, the old wood windows had dictated the placement of our new aluminum windows, so we had some issues with straight lines, and the center window has a “tilt and turn” feature with a very slim frame – not a lot of wiggle room.

While work was underway, Nick alerted me whenever there was a tricky issue to resolve. For example, he discovered that one of the side windows was actually an inch and a half higher than the other window and he also pointed out a spot where my drawings of how to bury a pipe were a little optimistic. We were able to work together through a cycle of conversations and quick sketches, and he also was able to reach out to his network within the same day when my own plumbing contractor fell through. He and his team were extremely meticulous in their workmanship as well as in their maintenance of the work site day to day.

The new wall is nothing short of amazing to me. It looks like it was always meant to be that way. The radiator installation fits so nicely, and the windows are finished off with red oak trim and sills that are seamless and beautiful. The shades are hidden nicely behind matching red oak valances. The wall’s performance is even more incredible than the aesthetics. It is now so quiet in the apartment that you would never know that there is a busy New York street of shops, restaurants, and bars below. We were very happy in the end to create a warm, modern facade that highlights the views offered by our new nine-foot windows.