The last six months have brought big-time changes for Blaise, Kristin, and their family of five. After welcoming their third child and moving from Manhattan to Brooklyn, Blaise and Kristin were ready to prep their new home in Prospect Lefferts Gardens for the long run. First up: a kitchen and laundry room update. We stopped in to take some photos along the way, but the rest of this story is told by Blaise, himself. “Sweeten made it easy to communicate our vision to contractors before they even set foot in our home.”

When we moved into our new home six months ago, we almost didn’t notice how limited the kitchen was. Living out of boxes and welcoming a newborn, it took us a few weeks to realize that we were having trouble finding space for groceries and that we had accidentally made a habit of storing kitchen basics in the basement. The move just about doubled the total space of our home, and yet we were struggling to find a place for everyday kitchen stuff.

Our punch list was pretty classic: kitchen storage was sorely lacking and countertop space was a joke. We are working parents who don’t cook that often, but we were ready to move our pots and pans out of the oven. We also realized that the bar-height counter was inaccessible for our kids and wanted to create a central gathering spot with a more standard counter height. The kitchen had been recently renovated and we liked the look, so we initially entertained the possibility of a quick fix like purchasing a kitchen island, but ended up deciding to use what we had and expand on it. At first, I tried to juggle contractor bids on my own, but with kids and jobs, that turned out to be decidedly easier said than done. I posted the project on Sweeten and added to the plans to create a laundry room in the basement by enclosing our washer/dryer with built-out walls and solid doors. Sweeten introduced us to this Sweeten contractor (of recent Sweeten blog fame!) and we awarded our project to him after seeing his straightforward and realistic style. My biggest fear was that a contractor would say yes to anything to seal the deal, but he gave us a realistic completion date and it was nice to know from the start that his team had already been screened by Sweeten. Our contractor guided the work through multiple stages and helped us seamlessly extend our existing kitchen cabinetry with custom drawers, stained and finished to match the look we already had. When we had trouble coming up with matching backsplash tile, he managed to track it down with a local builder. We were also grateful for his willingness to work around our family’s schedule – naturally, we picked New York’s most brutal winter to live through a kitchen renovation and relied on Paul to gracefully adjust on snow days when the kids were home.

After watching our contractor put the new cabinetry pieces in place and create a dedicated laundry room, we found a few other spots for his team to add finishing touches and details including cosmetic wall patching and custom doors to replace a tired set that concealed the fuse boxes for the property. We are thrilled with the results and psyched that we were able to work with so much of what we already had. Instead of cutting into our living space, the new drawers and extended counters have preserved our open kitchen and put everything within reach. The new laundry room helps us stay organized and minimizes the sound of the machines so that we can enjoy the play space with our kids. Even my mother-in-law was impressed, an unforeseen but welcome benefit of the hard work! 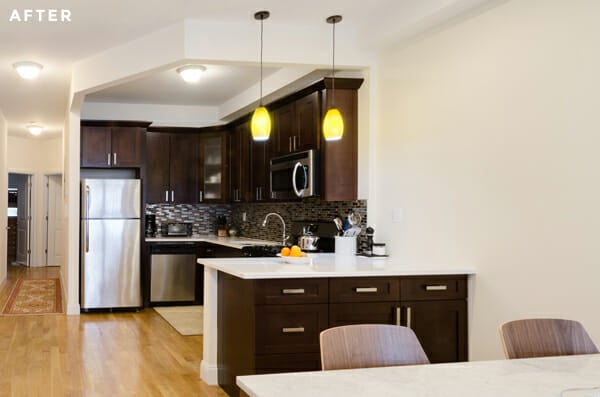 Bravo to Blaise and his gang for a great team effort! A smart kitchen extension and a real laundry room are a huge win for any NYC family. We’re always glad when we can impress extended family members; we just hope the pans and the oven are adjusting to their newly-longer-distance relationship!