A Studio Evolves into a One-Bedroom Home

A first-time homeowner banks on the right layout

At 18, life with roommates is practically a given, especially on New York’s pricey real estate scene. By 34, however, sharing your living quarters can run its course. For Paul, a financial analyst, rising rent compounded his need to own his own place. After a year of searching, he adjusted his criteria for what he was looking for and landed on a studio billed as a “junior one-bedroom”—it turned out to be the right call. Paul posted his project on Sweeten, a free service matching renovators with vetted general contractors, and found a design-build team to maximize every inch of the 530-square-foot home that resulted in a true one bedroom. 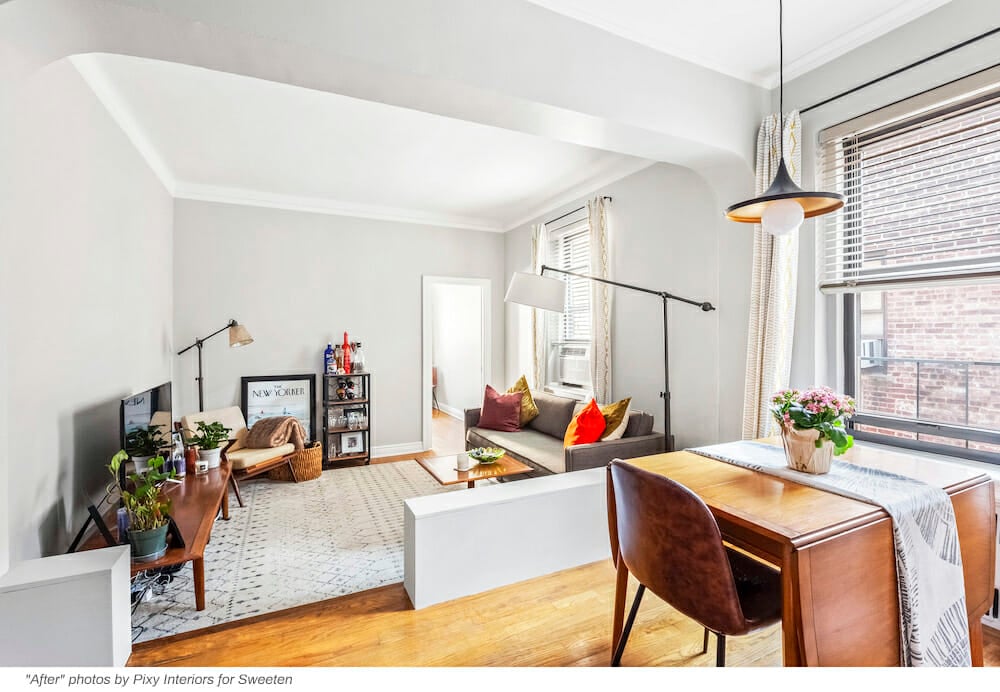 I moved to New York in 2007 after graduating college and settled in Hell’s Kitchen because of its relative affordability and proximity to the subway. For the first nine years, I lived in a large cookie-cutter rental building with two roommates, and first started looking into buying about three years ago. There were two motivating factors behind my search: The first was that I felt it was time to have my own place. I had lived with roommates since I was 18, and it was a great way to save money on the margin, but I was ready for a change. I had always thought that owning my own place in New York would be a proud moment and an important milestone in my life. The second reason was financial, as I had seen our rent increase over $1,500 in my time there. That was a tough pill to swallow, but at least manageable when splitting it with a roommate. I didn’t want to put myself in that position if I lived alone, however. I had saved enough money over time to cover a down payment and soon found myself checking the real estate websites on a daily basis to find the “perfect” apartment. 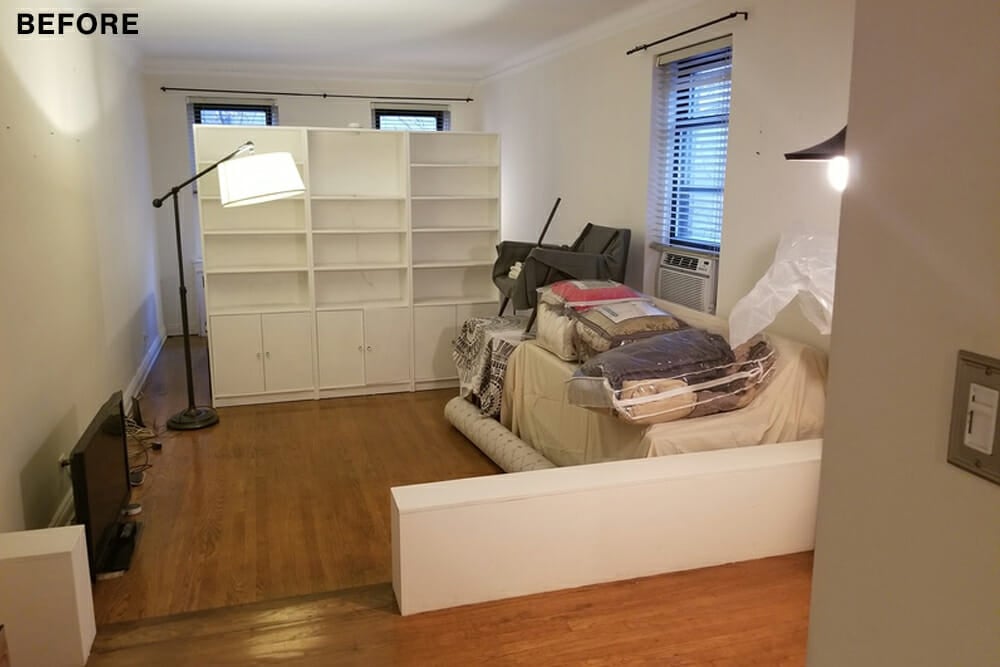 My two main requirements were that the apartment had one bedroom and good light. I also wanted to stay in Hell’s Kitchen so that I could still walk to work. But I quickly realized that there was no such thing as a “perfect” one-bedroom apartment in my price range, and anything that was close to what I wanted would go into contract within days of the initial listing. Competition was stiff.

Then, one day, after a year or so of looking, I decided to look more seriously at alcove studios with the idea of putting up a wall to create a one bedroom. I ended up finding a studio that was listed as a “junior one bedroom” on the top floor of a 1930s co-op in Hell’s Kitchen/Clinton. The kitchen and bathroom were a bit dated,  but that was less of a priority for me.

My contractor matched all of the crown moldings to the originals in the apartment. Honestly, I didn’t expect it to look as good as it does.

More importantly, the current owner had already set up a large built-in bookcase to separate the bed area from the general living space—so you couldn’t even see the bed—and there were windows on both sides—two large ones facing north with trees offering privacy into the interior space and three large windows facing east toward my neighbor’s apartment. This was the exact studio layout I needed for my conversion into a true one bedroom. 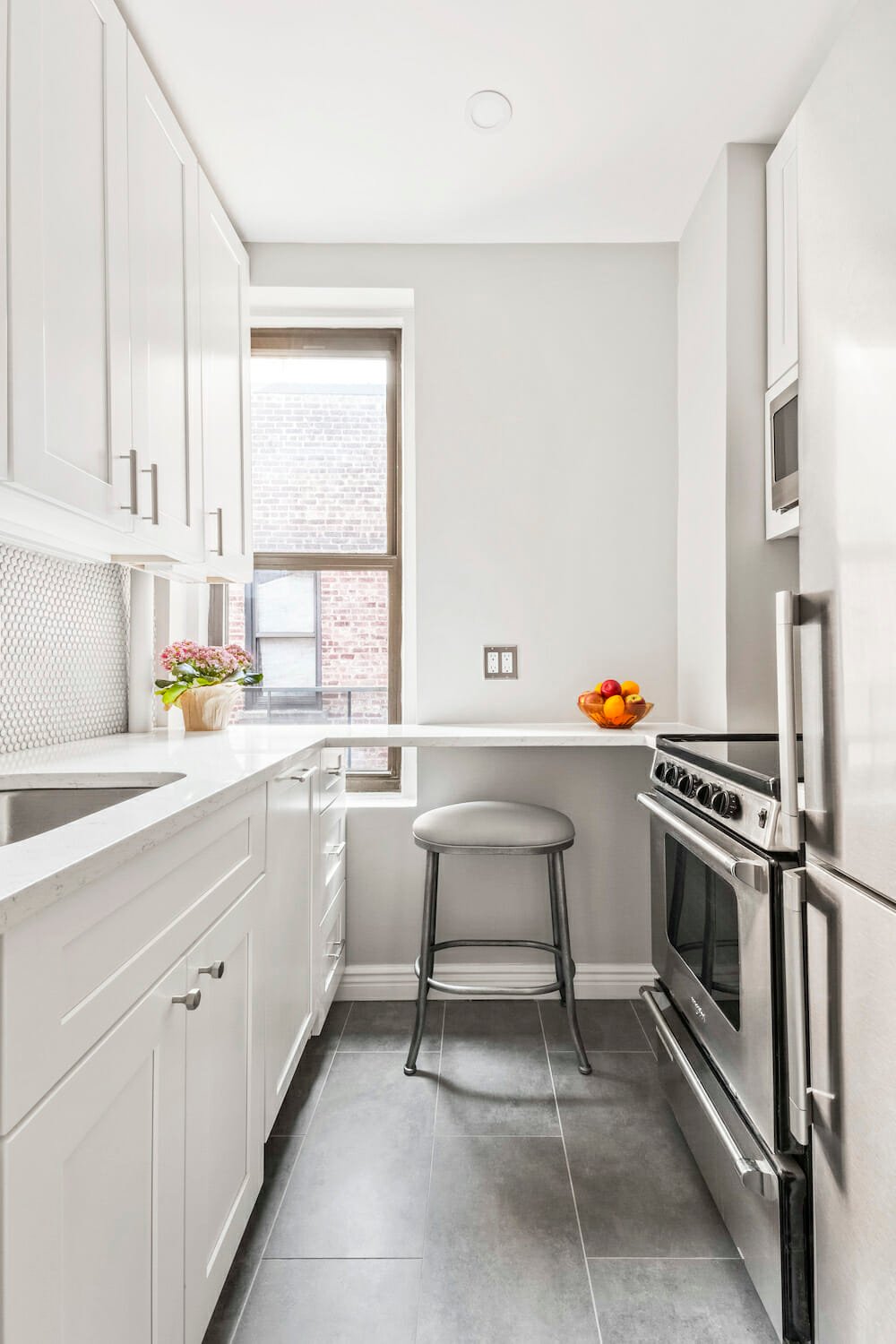 The original timeline was four to five weeks, but the project ended up taking eight weeks to complete. (A heads-up to first-time renovators: It does cost more and takes longer than you expect. It’s New York City, after all, so you need to account for this variability). In my case, part of the extended timeline was due to Thanksgiving and Christmas breaks.

My contractor helped in two ways though—one strategic and one tactical. First, it’s important to have the support of the co-op or building super for a renovation, and my contractor ensured that all of the co-op building work rules were met. Second, I would leave “to-do” lists each night toward the end of the renovation outlining items that I wanted to be addressed. I would then return the following day with each having been taken care of.

Updating the kitchen was a big part of the reno (and a big portion of the budget). The existing galley kitchen was from the 1980s and extremely small with little usable counter space. We maximized the layout so that it flowed better and felt less cramped.

The location of the stove and refrigerator were swapped. It not only provided more functional surfaces but we added an additional 14-inch ledge of counter space by the window. It had the effect of creating a wraparound spot where I could fit a stool and use it as a small breakfast bar. I was excited (and partially anxious) to see the various parts come together as a cohesive final product. I only had an idea of how everything would work together. The wall is fantastic and looks like it was always there. My contractor matched all of the crown moldings to the originals in the apartment. Honestly, I didn’t expect it to look as good as it does. It was important that the new full bedroom design maintain the apartment’s natural light. It also needed to be large enough to fit a queen-size bed comfortably and allow me to walk around without any issues. My goal was to have a real wall creating two separate rooms and not look like a temporary or flex wall. Now that I’ve finished my renovation, I suggest letting your design-build team know upfront what your priority is. For example, I was less focused on the timeline as long as the work was done correctly. And ask questions! Communication is critical and you don’t want to assume anything.

I actually chose to live in my apartment throughout the renovation process. The only night I did not stay was the first day of demolition. I would not recommend this for everyone though. I was largely motivated to put the money I saved, from not renting a place for 1-2 months, back into the renovation. (I had originally thought my budget would be enough for a kitchen, bathroom, and wall; however, I had to remove the bathroom from the scope upfront.) My contractor was very accommodating as this was likely a nuisance for him to clear a path for me to walk in and out to my bed every day. It was clear to me throughout the renovation process that my design-build team wanted me to be happy with the finished product.

I wasn’t able to find the perfect one-bedroom at first, and I learned that nothing will be perfect, but I am extremely satisfied with the end result while staying within budget. Now, I’m proud to call the apartment my home and, even though I set out to live alone, my next plan is to adopt a dog or cat.

Thank you, Paul, for sharing your very own new home!

Six Sweeten renovators maximize and bring a cozy vibe to their bedroom.