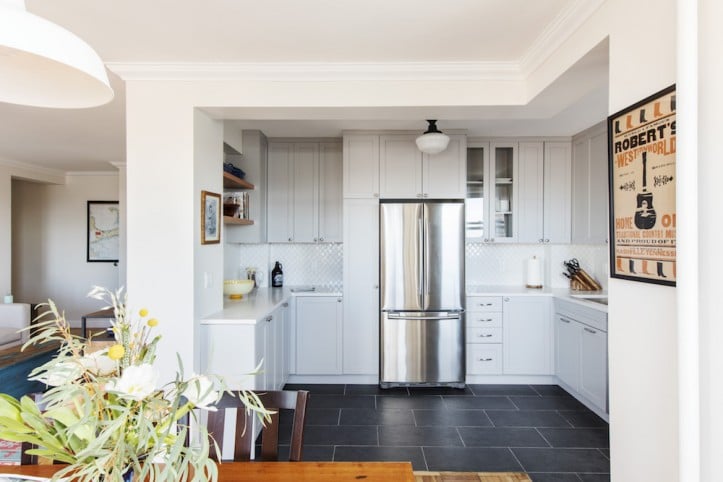 Project: Open up a dark and cramped kitchen in Brooklyn

Before: When Anne and Michael moved into their two-bed, one-bath apartment in the Clinton Hill Co-ops, the space was in need of an overhaul. Wisely, the couple decided to live with the kitchen for a couple of months to understand how to customize the space to their needs. They moved into the bedrooms but kept the living room and kitchen fairly empty. “We felt it was a plus to live in the space for a minute before diving into our first renovation, even if the space did feel quite sparse at times.”

The great views and natural light from the big windows became the focal point. In contrast, the small, cut-off kitchen was saddled with an outdated color palette and cheap materials: wood-paneled cabinets, a busily speckled countertop, and pink square floor tiles that brought out an unflattering orange hue in the cabinets. The two small doorways leading into the kitchen created an awkward flow and isolated the space from the rest of the apartment.

Anne and Michael posted their project on Sweeten after being stuck in a “contractor no man’s land.” They had spoken to handymen who felt the scope of the project was too ambitious for their skills, while contractors they met only wanted to take on larger and more costly projects. “Neither of these options felt right. Sweeten was great; we posted the project and the budget and got serious responses from contractors specifically interested in a project of our size. Filling out the Sweeten project form helped us to clarify the specs of the renovation for ourselves as well.” This Sweeten contractor turned out to be just the right fit.

After: A reconfiguration of the floor plan eliminated the two small entrances and created a new, U-shaped kitchen that opened up into the dining space. This allowed more light into the kitchen while maintaining a separate cooking area. Anne and Michael also traded in the orange-brown-pink for a more subdued and calming color scheme. “Our contractor helped us source our appliances, counters, and backsplash tile, which we found really helpful as first-timers,” says Anne. Shaker-style cabinets were semi-custom in a cool, soft gray and paired with a backsplash made of small-scale white tile laid in a diamond pattern. After some delays and frustrations with the cabinets, they almost wondered if stock cabinets would have been the better decision. However, their contractor was patient and worked to get them back to a happy place—while still on budget. A full-length pantry alongside the French door refrigerator adds much-needed storage space.  Their advice for future renovators? “It is such a cliché, but it’s going to take longer than you anticipate,” said Anne. They also moved out during demolition. “We thought about muddling through and continuing to camp out in the bedrooms, but I think the work got done more quickly this way.”

Bonus: Having lived with compact appliances in a small rental kitchen, they were thrilled they could fit full-sized appliances AND the storage they wanted in their new kitchen. “We just hosted Thanksgiving for ten people, and the kitchen really worked from a storage and counter space perspective. It’s exciting to be able to host like that in our new home.” 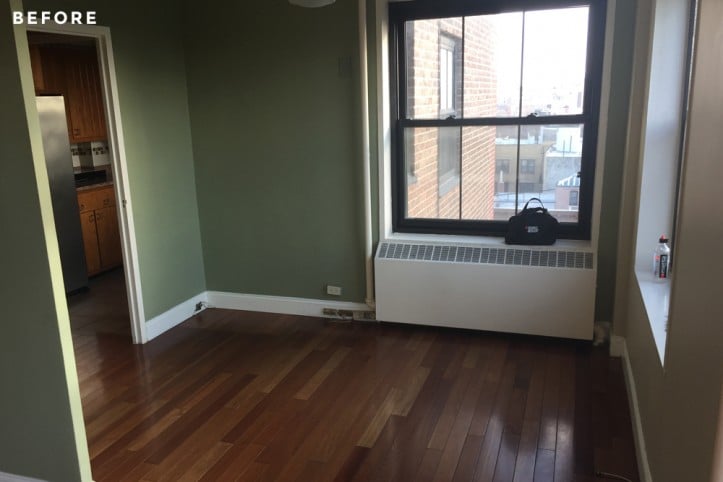 Janet and Jerry’s kitchen proves that a “gray area”—from the cabinets to the backsplash—can be a good thing.