A Small Kitchen in Queens Maxes Out Its Footprint

Deva and Sam scored an extra appliance—and a storage bonanza 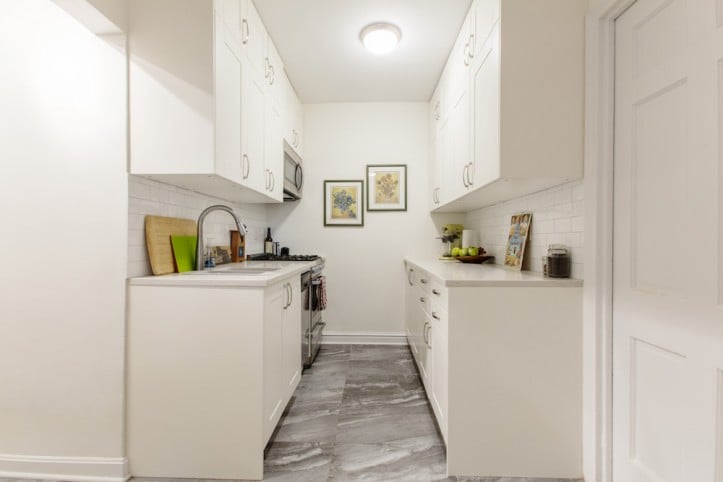 Deva and Sam’s small kitchen in Queens functioned just fine. It was also incredibly bland with a floor at the tail end of its lifespan. “We wanted the kitchen to feel bright…to be modern and clean, but in a way that wouldn’t feel quickly dated,” said Deva. The couple saw the storage potential in the hallway connecting the kitchen to the rest of the apartment. The two Ikea butcher blocks they had there were only handy for additional food preparation space; with no power outlets nearby, a long, awkward extension cord was needed to plug in the coffee machine. But, after living in the apartment for six months, what really motivated them to renovate was getting that life-changing mechanical device called a dishwasher. Sam and Deva often have friends over for dinner on Friday night, which meant piles of dirty dishes that hung around for half the weekend. To maximize the space, Deva and Sam spent a lot of time measuring their kitchen. “We didn’t want to change the footprint too much in order to stay on budget,” said Sam. One problem area was the refrigerator, which ate up plenty of cabinet and counter space while casting a shadow over the oven. Their contractor, who they found through Sweeten, suggested moving it to a corner. “It was hard to picture at first,” said Deva, but concluded, “it was absolutely the right choice.” The hallway now features extra outlets where the coffee machine sits full-time along with drawer storage for other countertop appliances. Their formal dishes—previously stowed in storage—are now showcased in new glass-front cabinets above. The couple also tried to keep all their appliances both cost- and environmentally conscious. In the end, due to the new layout, they had to bring in a smaller stove but were able to keep their refrigerator. A hiccup occurred when a co-op policy caught Deva and Sam off-guard. As they were renovating, they were required to replace their old 1940s fuse box with a modern circuit breaker. That, in turn, meant they had to rewire much of the apartment. And that became Deva’s best advice to renovators: “Know what your co-op board requires, in detail, before you get started.” Bonus: A friend was renovating her kitchen around the same time and gave Deva and Sam her old dishwasher. The only catch was it needed to be picked up. While the couple was struggling to maneuver it into the passenger seat of their car (because it didn’t fit in the trunk), a stranger jumped in to help. “He simply said ‘My kid’s in the car, and I want him to know that when someone’s having trouble, you help them,’” recalled Deva.

Lisa and Chris opened up their closed-off kitchen in Queens, adding storage and dining in the form of a peninsula and improving the flow of the space.