Before: In 2013, Kate and her husband, Graham, purchased a 4-unit townhouse built in 1890 in Clinton Hill, and moved into it with her two brothers and their families. (They operate the apartments within the townhouse as informal condos and share costs and decision-making.) While they knew that there were changes that needed to be made, they did not consider a gut renovation. Four years down the line, after living in the space, they determined that expanding and redoing a tiny kitchen that was tucked into the back corner of their apartment was a priority. It was closed off from the rest of the apartment inside an addition to the original house. The addition had been divided into a small galley kitchen and a second room that was “too small to be a living room or a dining room,” explained Kate. The narrow kitchen had small, outdated appliances and the refrigerator was awkwardly placed in front of a window. It was hard for two people to pass each other in the space. Given that the kitchen did not function at all the way their family needed it to, the couple posted their project to Sweeten, a free service matching homeowners with vetted general contractors.

After: Working with their Sweeten contractor, Kate and Graham envisioned an open space so that meal prep could be “a family activity and a space for doing homework while dinner was getting made,” said Kate. They wanted to go vertical with custom cabinets and counters to maximize the amount of surface and storage space. While they did need to remove a wall and a closet, they were intent on retaining as much of the original wood and plaster detailing as possible so that the new kitchen would pair seamlessly with the rest of the prewar apartment. 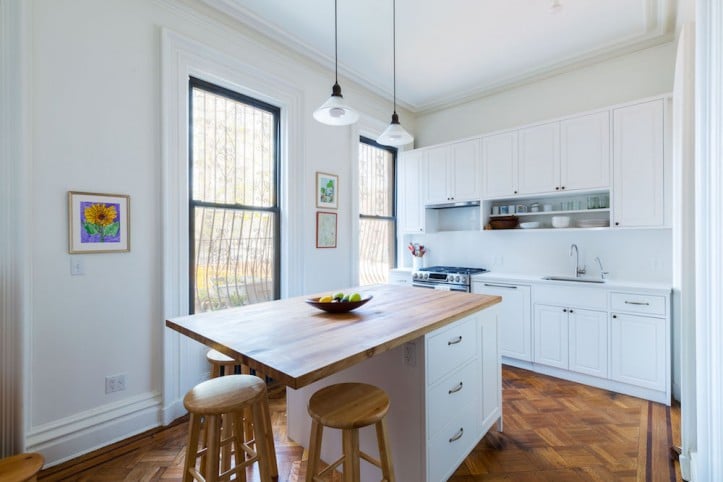 The pantry cabinet next to the sink got a makeover; the glass panels had either been replaced with plywood or painted over, so they had new glass put in. It now makes a nice display for cookbooks and spices. “We believe that before the addition was put on the back of the house, that door would have been the exterior door to the yard,” said Kate. Demo revealed that the molding and flooring had continued throughout the original space as they predicted. The new layout also allowed more light into the rest of the apartment. Kate and Graham chose integrated appliances for a built-in look. Given that the kitchen is now in plain view from the rest of the apartment, they did not want it “to scream ‘kitchen,’” explained Kate. The refrigerator replaces what used to be a closet and looks as if it has always been there, disguised by a cabinet front. They attempted to minimize stainless steel with hardware and cabinet choices that were “understated, practical, and looked more like built-in furniture.” While quartz was chosen for the backsplash and countertops around the stove and sink for its durability, they softened up the space by topping the oversized island with butcher block. The wood floors were sanded and refinished for continuity with the rest of the home.

The custom cabinetry was the most expensive choice that Kate and Graham made, but they “were committed to this expense from the beginning because [they] knew it was the only way to maximize storage space and because the cabinets are by far the most prominent feature of the kitchen,” said Kate.

Because they did not use an architect, there was quite a bit of “game-time decision-making” that slowed things down. Now that the project is finished, however, the whole family loves the space. “The kids show off the fact that the fridge and microwave are hidden behind doors to everyone who comes over. We all spend most of our together-time in the kitchen now,” said Kate. “And when people come over, it’s where everyone inevitably ends up hanging out.”

Bonus: By hiding ductwork behind the upper cabinets, the couple was able to remove the drop ceiling in the kitchen to gain more height in the space.

A rip-and-replace kitchen renovation gets details, storage, and a coffee area.