A Love of Historic Buildings Transforms a Studio As someone who works for a real estate investment company, Kasey has an innate appreciation for New York City’s grand architectural history. So it was no surprise when he purchased a prewar apartment along Park Avenue within the Murray Hill Historic District, which boasts landmarks such as JP Morgan’s mansion and the Union League Club. “When I moved to New York, I was fascinated by the prewar architecture,” he said. “It makes New York real estate what it is.” During his search, he specifically set his sights on a prewar building with original oak herringbone floors. Even though the space he was considering appeared to be stripped of any ornate details, Kasey had seen other apartments in the building with the original patterned wood floors. He suspected—and hoped—that underneath the carpeting of what could potentially be his home, he might find the same wooden floors that he could refinish to their original condition. On his final inspection before closing, he lifted up a corner piece of the sad floor covering, and sure enough, herringbone wood floors in near perfect condition peered back. It remains one of his favorite aspects of the prewar apartment.

That discovery was the beginning of a rather long process. Initially, Kasey planned to renovate in stages, starting with a kitchen makeover along with unveiling, sanding, and refinishing the floors. It quickly became clear that doing the whole apartment, including expanding a dressing closet into a small bedroom and renovating the bathroom, would best be accomplished all at once. The building’s co-op board, known for being strict, took six months to approve Kasey’s purchase. He anticipated that gaining their approval for the renovation would also take months and he only wanted to go through that process once. When he posted his project on Sweeten, his matchmaker helped find a contractor who had experience navigating co-op boards. From those he interviewed (including non-Sweeten contractors), he ultimately chose a Sweeten team because of their knowledge working with tough boards and their track record renovating similar prewar apartments. “They came with the experience of what is allowed in a prewar building and what isn’t,” he said. Other historic building details included cement walls throughout the home, which made demolition an involved process but ended up benefiting as sound insulation from neighboring units. 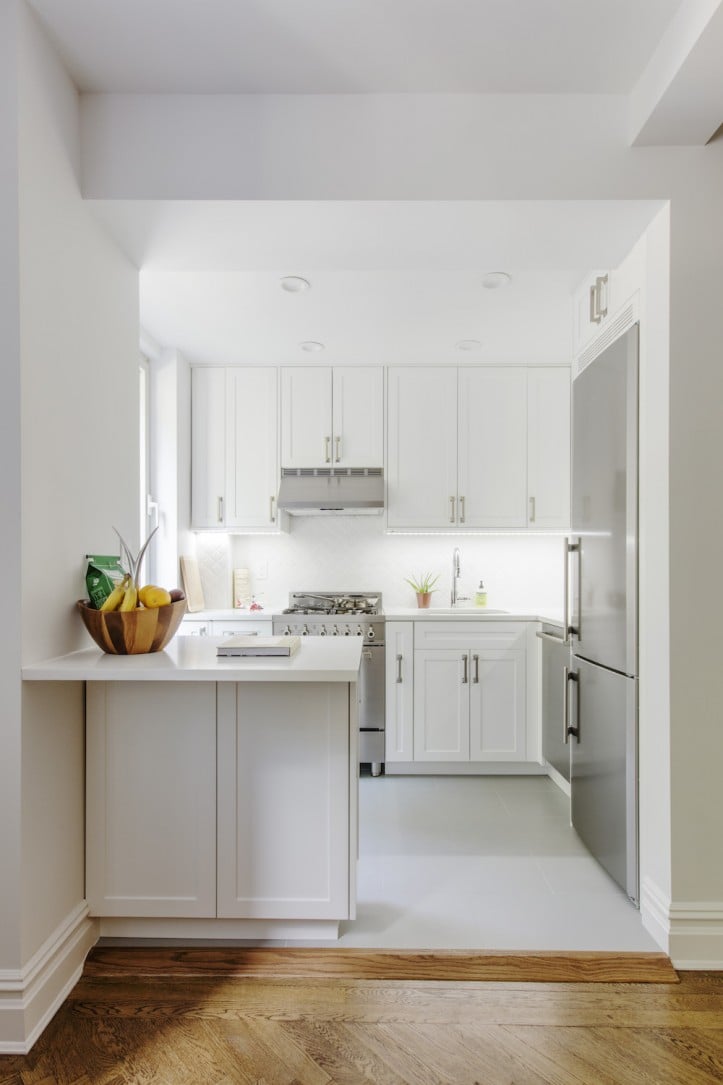 As the board waded through his renovation plans—it ended up taking four months to approve, the same amount of time as the entire renovation—Kasey rarely stayed in the apartment. “It was in such bad shape,” he said. He opted for hotels and couches of generous friends. The studio was an estate sale and it looked like it. A boxy kitchen, cheap and tired cabinets, a grimy bathroom and carpeted floors throughout made for a dreary atmosphere.

Kasey’s aesthetic goal with the renovation was “to be mindful of the prewar nature and reflect the traditional design of the building and block.” For the clunky kitchen with a cramped layout, he basically started fresh. “I wanted to open it up and make it seem as large as possible,” he said. He got rid of the wall that separated kitchen and living room; not only did this merge the two spaces, it allowed the small window in the kitchen space to spill light into the living room. That is also why he envisioned a mostly-white kitchen—to reflect more light into the living room. Even though Kasey doesn’t cook much, he specifically wanted a Bertazzoni range after noticing its distinct and refined design during a trip to Italy and felt it fit well with the understated classic style of his kitchen. The range threatened to delay the project when the wrong model was delivered, but Kasey’s Sweeten contractors quickly replaced it with the correct model. He also wanted a kitchen island that ended up morphing into a peninsula. “It actually comes into the living room and overlaps with the wood floor to combine the two spaces,” he explained. In the bathroom, he let his Sweeten contractor, a design/build firm, guide his design choice that would best suit a building from the 1940s like his. After sifting through 100-plus subway tiles that differed in color, gloss, and size, Kasey felt a white gloss subway tile was the classic way to go. Delicate hexagonal marble tiles on the floor and a light marble on the sink provide an understated detail. “There are no windows, so I was trying to use light shades of paint and reflective tiles to brighten it up as much as possible,” he said. Kasey’s Sweeten contractor encouraged him to keep the bathroom layout the same to avoid unnecessary permits from the Department of Buildings. He contemplated a walk-in glass shower but eventually went with a tub for resale purposes.

There were practical things to consider, such as storage lost when the dressing room turned into a small bedroom. While a door leading into a private elevator entrance was no longer in use, it helped provide space for a closet. It also remained a nice historical detail in the prewar apartment. Kasey also used furniture as a repository for more items—a living room coffee table doubles as storage.

While Kasey loves his new renovation—the classic look, the bright space, and those herringbone wood floors—he has a new appreciation for the involved process of renovating in Manhattan. However, he learned one important lesson. “It is much more rewarding to live in an apartment that you spent a bunch of time renovating,” he said. “It feels a lot more like it’s yours.”

Thank you, Kasey, for sharing your new home with us, and we hope you enjoy your much-awaited prewar apartment.