An Apartment for a Party of Four, Then Five

British expat Sam and her American husband, Sean, had been living in Park Slope for several years when they made the decision to find a place to buy. While they casually searched in Park Slope and its surrounding neighborhoods, they also prepared their finances and readied themselves for when it came time to make an offer. A fortuitous series of events led them to bid on—and win!—the first apartment they visited.

Sweeten shares their (enviably easy) search and how they transformed a long-empty, rundown apartment into a beautiful home for a growing family. Having heard horror stories from friends who suffered through multiple failed bids, Sam and Sean anticipated a difficult process. They imagined that they might also face rejection, so they jumped into the process with an offer after their first open house visit in the nearby Clinton Hill neighborhood. They realized that the space was old and hadn’t been lived in for quite some time, but were able to see past the grimy kitchen and bath, as well as the worn floors and peeling paint in this two-bedroom apartment in the famed Clinton Hill Co-ops (we’re big fans, as you know). The large bedrooms were a big plus, while the generous common area could open up even further by removing walls separating the kitchen from the dining and living rooms. Otherwise, the size and layout were exactly right for their family of four, and they would remain within commuting distance to their daycare. The listed price also left room in their budget for the renovation the apartment so desperately needed. 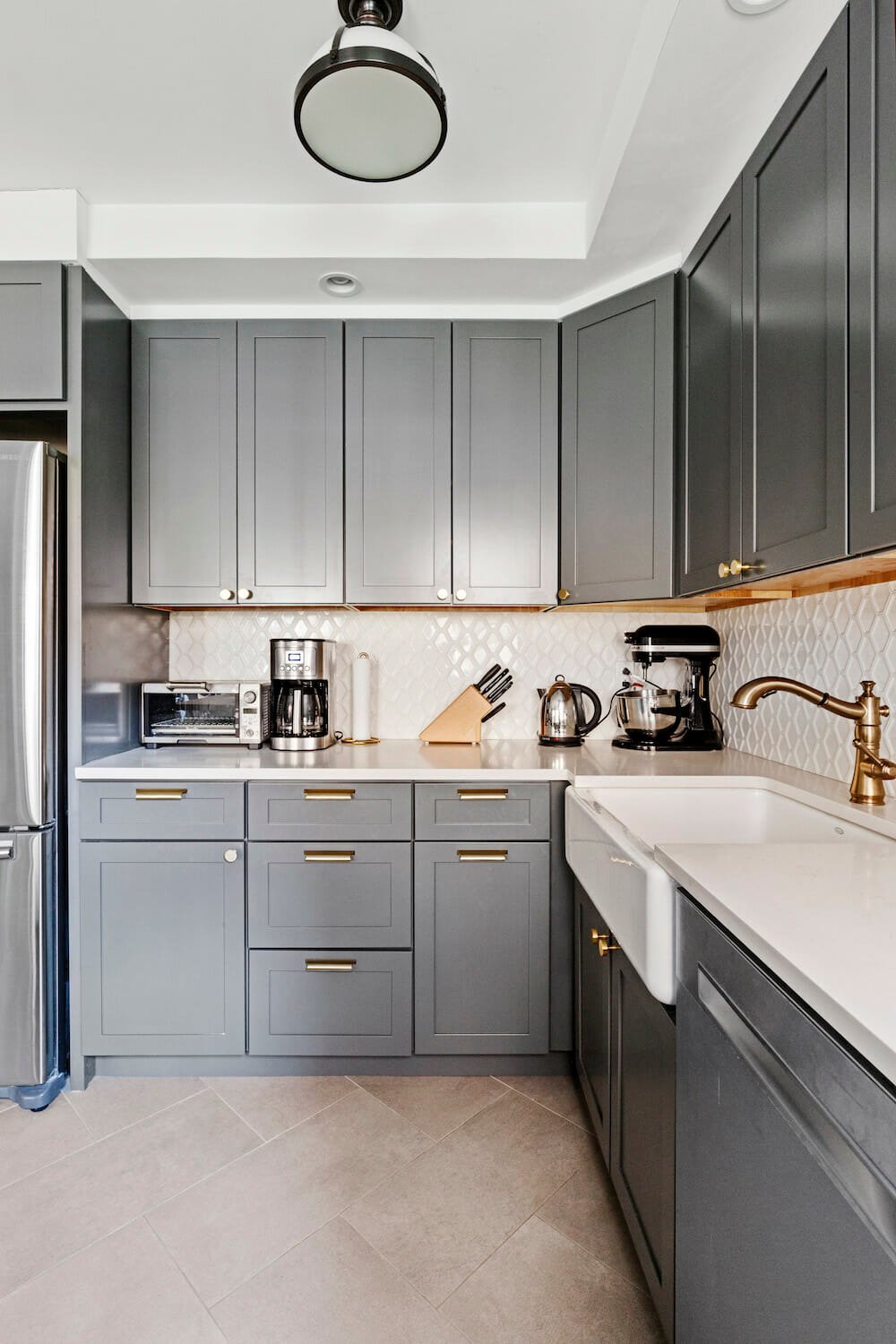 When the discussion came around to renovation at the Open House, the listing agent, Tom Stuart (who coincidentally also lived in the CHCs), mentioned that Sweeten would be an option for their project, given the ever-growing list of Sweeten alumni in the complex. So as they went into contract, Sam posted the project and requested bids from contractors. A Sweeten contractor fit the bill, and they got to work updating the apartment after a slight delay in obtaining approval from the board and managing agent.

To create a feeling of spaciousness, walls were knocked down to open sight lines between all of the common areas. (With two kids under five, this was especially important.) Sam wanted the kitchen to feel as large as possible by New York City standards, since the couple cooks frequently. The contractor closed off one of the openings between the hallway and the kitchen, so that a pantry and refrigerator could be installed in that space.

On the opposite side of the kitchen, in place of the old walls framing the dining area, a peninsula was installed for additional counter space and storage. The sink was moved out of a cramped corner, and placed alongside the dishwasher for ease of access. Sam chose to go with stock cabinets for the affordability factor. (Also, by this point, they learned that Sam was pregnant with their third child, meaning that this was unlikely to be their forever home!)

When considering the palette, soothing neutrals provided a subtle backdrop to the inevitable and colorful chaos that always accompanies kids and their toys. In terms of storage, the full-length pantry was outfitted with pull-out drawers for maximum accessibility. Drawers were also installed in the peninsula instead of shelves. The kitchen design also included a Lazy Susan in the upper corner, so that hard-to-reach items in the back wouldn’t be a problem. Lastly, an integrated garbage bin kept the trash out of sight. Deciding early on they did not want the hassle of obtaining plumbing permits, the couple left the fixtures in their original locations and instead focused on finding brighter, cleaner replacement options. They carried the same neutral look in the small bathroom, installing open shelving, a large mirror, and a metal-legged console sink to reduce the feeling of clutter. Behind the mirror is a spacious medicine cabinet for toiletries. And although a console sink meant no storage underneath—a brave choice for a family bathroom!—Sam reports that they’ve had no problems on that front, given the large hallway closet right outside the bath. For tile, a classic white subway tile on the walls and a subtly-patterned cement tile on the floor set a tranquil feel, while Pottery Barn lighting rounded out the space.

In the rest of the apartment, the couple’s Sweeten contractor also refinished the floors and installed carpet over the hardwood in the bedrooms. Sam confides that it was Sean’s preference and she was initially unswayed, knowing it would be a controversial choice. But having lived with it now for a few months, they love the softness underfoot, especially for playing with their kids. (Plus, the wood remains intact and an option for restoration in the future.)

Additionally, the two closets in the master bedroom were combined into one, and the entire apartment was skim-coated and repainted. One thing that Sam wished they had done—and are now in the process of doing—was to paint and finish the undersides of the cabinets.

Throughout the process, the duo attempted to visit the work site regularly. In fact, this is her tip to future renovators: “Go to the apartment every week, at the very least. At first, we only visited on the weekends, when we had time. But the contractors weren’t working then. We realized that checking in at some point during working hours was a huge help, and that things went more smoothly when we did that, even though it was a pain. We could discuss issues as they came up, and see what they were talking about.” The renovation was completed within four months, allowing them to turn their attention to their next major project, a new baby!

Thanks to Sam, Sean, Ellie, Ernie, and baby Alice, for sharing your home! We hope that you’ll make some great memories in that gorgeous space. (Special thanks to Sam for sending over the list of resources on her due date!)

Love the mix of tile and hardwood in Sam and Sean’s kitchen? Check out our guide on how to choose the best kitchen floor for your family for a rundown on materials and options.