For Holly and Christian, finding a new home in their Greenwich Village neighborhood proved to be a daunting challenge in a super competitive market. A depressing two-bedroom co-op in a 1920s building seemed like a deal-breaker at first glance, until the couple realized an important truth about Manhattan real estate: there were things they could control and things they could not change. Their realtor pointed out that location and square footage could not be altered, but design and interior finishes were fair game. So, Holly and Christian decided to stick with the neighborhood they loved and dig in with a renovation in a space overlooked by other buyers because it needed so much work. Holly, who works on the business operations side for Bravo and Oxygen, and Christian, who works in finance at AIG, were admittedly “completely non-creative people.” With an ambitious gut renovation of the kitchen and bathroom and major skim-coating needed on all of the apartment’s walls, their realtor directed them to Sweeten, a free service matching homeowners with vetted general contractors. Holly posted their renovation project and was matched with a Sweeten contractor who helped steer the couple in finding a happy middle ground between traditional country kitchen and modern city living. Above almost all else, Holly wanted to avoid a renovation that would be drastically out of sync with the building’s pre-war aesthetic. The couple came to rely on their contractor’s wise guidance to incorporate serious upgrades while still playing up the classic character of the space. The team opted for muted gray and ivory tones for the kitchen, brightening the space entirely and bringing in understated luxury touches that blend both modern and traditional materials. 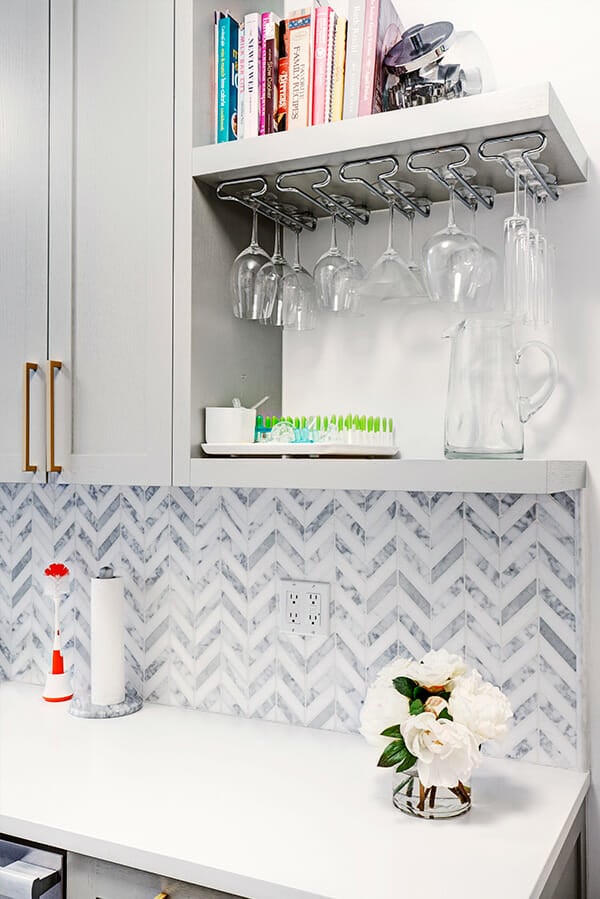 Even though friends and family warned against the price and sensitivity of marble, the couple fell in love with cloud-colored marble floor tiles and have no regrets about that luxe choice. The team supplied the designs and materials for custom-built natural oak cabinetry — going custom allowed them to pack in specialized storage and a concealed, stackable washer/dryer, all within a slim space.

They chose a soft gray paint for the cabinets and settled on a durable white Caesarstone countertop (one of the more affordable and less precious options) with an undermount sink and distinctive bridge faucet. Holly discovered unique brass hardware from Schoolhouse Electric, which she credits with bringing a touch of warmth and masculinity to the cooler color palette. Their contractor’s design eye led them to an ivory and stone gray chevron marble backsplash, which gives the traditional design of the room a pop of creative modernity.

At their Sweeten contractor’s suggestion, they decided on a Dacor oven range, a floor sample that won Holly over with its Made in the USA stamp of approval, and focused other stainless steel appliance selections (a Liebherr fridge and a Miele dishwasher) on slimness, function, and price. The team brought the same design and build balance to the bathroom, helping the family create a new room almost entirely without changing the footprint. Holly and Christian set out to make the room feel larger than it actually was, so they kept the same serene color palette here, too. They chose an intricately patterned bluish gray and white marble tile for the floor, and brought in the same white marble used in the kitchen for the shower.

The couple chose a squared, open console sink that they happened upon in a local tile shop. Its narrow structure and large basin fit in the small space perfectly without sacrificing functionality or style. The same can be said for the mirrored medicine cabinet, which they chose for its roominess. They also went with a smaller, efficient Kohler toilet and topped the room off with a wall-mounted lighting fixture. Beyond extensive work in the kitchen and bathroom, they also stripped and skim-coated the walls throughout, took on necessary electrical upgrades in every room, and coated the new surfaces in fresh paint, all proving Holly and Christian’s initial gamble true. Taking a chance on a fixer-upper wasn’t the original game plan, but with a new baby arriving shortly after renovations were completed, we’re so glad this young family could create a real home in the neighborhood they know and love!