Got a small kitchen? With a peninsula, you can easily increase much-needed surface and storage space 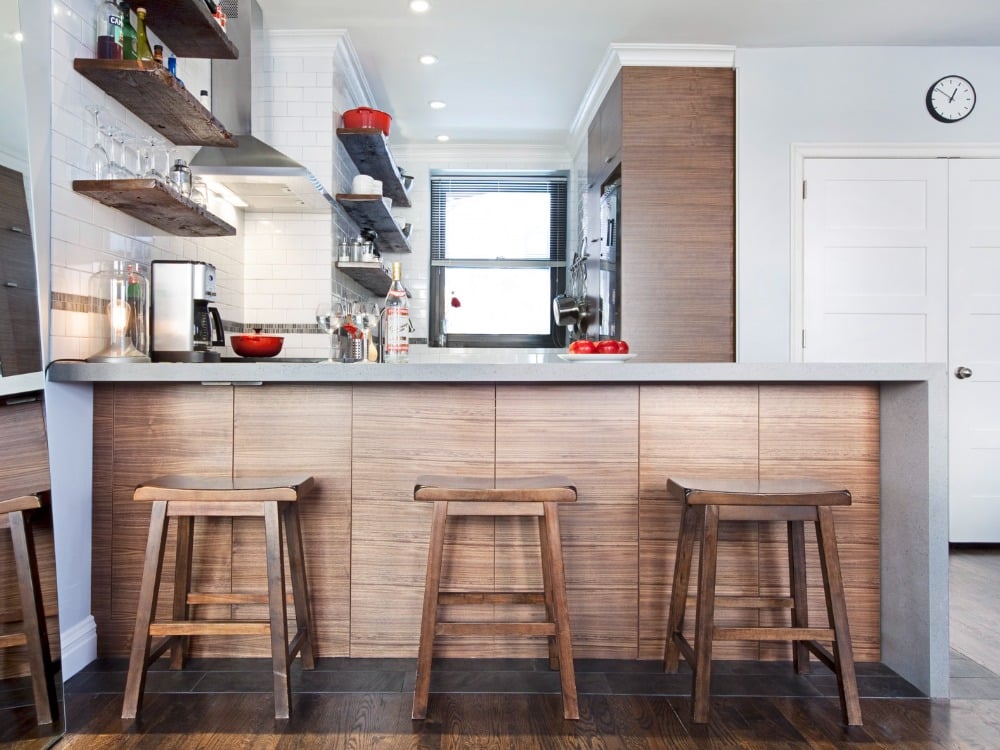 (Above) Dan and Mike’s industrial-influenced kitchen with peninsula

If you live in a studio or a small apartment, there’s a good chance that your kitchen is tiny. When planning the floorplan of a smaller space, much of the square footage goes to the main living area, perhaps a living room in a one-bedroom apartment or a bedroom in a studio. And if there’s not a wall between your kitchen and the rest of your space, you likely have a dead-end; an empty gap, the end of a row of cabinets, or the fridge. Instead of leaving the unfinished end open, make the most of it by adding a small peninsula to extend prep space, boost storage, and gain a dining area. Below are five examples from Sweeten renovations—small kitchens with peninsulas—that added a “table for two” to extend their space. Frans and Dalal’s kitchen in Gramercy

With their kitchen squeezed into a small nook in the center of their Gramercy studio, Frans and Dalal had no room for a proper dining table. A small peninsula at the edge of the space allowed them to get creative, adding a dining spot that’s just the right size for the two of them. The peninsula also houses their microwave behind a “secret” cabinet door, increasing the available surface space of their countertops. Kelly’s small studio kitchen had a tiny square of counter space that was barely bigger than a postage stamp and a narrow ledge that served as a bar counter. In order to create more comfortable cooking and dining experience, Kelly moved the fridge outside of her kitchen’s tiny footprint, which allowed her to increase the counter space. She also swapped the bar for a slim peninsula topped with butcher block and added storage on one side with pull-out drawers.

A party-ready setup, thanks to a well-placed peninsula Erica and Donna’s kitchen was contained in a small, box-shaped room off of the main living area. The couple chose to extend the kitchen beyond the limits of its walls by incorporating a peninsula that connected to the wall that concealed the fridge. With its proximity to the kitchen and the main living area, the peninsula is now the perfect spot to lay out appetizers for a party.

Knocking down a wall allows for peninsula seating space Heather’s kitchen on the Upper West Side

The light from the window in Heather’s kitchen never reached the rest of her living space because of a wall. Taking down that wall was the first step in opening up her apartment and allowing the light to flow through. It also gave her the opportunity to build a peninsula for dining and entertaining that made better use of the small front room next to her kitchen.

Expand small kitchen layouts with a peninsula ideal for eating The kitchen in Giovanni’s apartment was not a room per se, but rather a collection of cabinets and appliances lined up along the back wall of his studio. To create some separation between the kitchen and main living area, Giovanni built a peninsula to both define the space and add a prep area. He also tucked his washer-dryer unit beneath it and extended the countertop. The result: a perfect ledge for dining.

Finding the right expert for your kitchen remodel

If you have some extra room to work with, adding a longer kitchen peninsula can open up your space and dramatically change your layout.