A 1920s Westchester Home Gets a Modern Makeover

A family of five settles into their new stucco house

In the summer of 2017, Brooke and Paul closed on a 1924 Mediterranean-style home in Pelham, New York. The couple, already living in town, was drawn to the location of the house, perched on a picturesque hillside cul-de-sac in a neighborhood full of young families like their own. The property was designed by architect Guy Mariner, who arrived in Pelham in the early 20th century, making his mark on the suburb’s historic residential homes and landmarked structures. Their “new” old home featured exposed oak beams, beautiful archways, and a barrel-tiled roof—not to mention original faience tiles and leaded-glass windows. The space was almost perfect for them, their kids—Charlotte, Francie, and Teddy—and their two black Labs, Hattie and Reed. There were a few changes that needed to be made to accommodate their busy daily routine. Their previous home had an expansive, open kitchen with a large island that encouraged casual family gatherings, and it was the go-to spot for baking, art and crafts, and Play-Doh sculptures. In this new house, the kitchen was closed off from the dining room and had lower ceilings. The cabinetry was warped, and the island was “too small for our family of five to gather around,” Brooke explains. The design choices in the kitchen did not match the rest of the house, and the duo wished for an aesthetic befitting the historic architecture of the home while addressing the practical and busy lifestyle of an active family. “We wanted to create a kitchen that would be functional for everyone to be in without feeling crowded,” she said. Additionally, the master bath needed a major facelift: a pedestal sink provided no storage and the ancient tub had to go. The pair posted their project to Sweeten, a free service that connects homeowners with vetted contractors. They were quickly matched with this Sweeten contractor, who they asked to design and install the kitchen, along with a new vanity in the master bath. 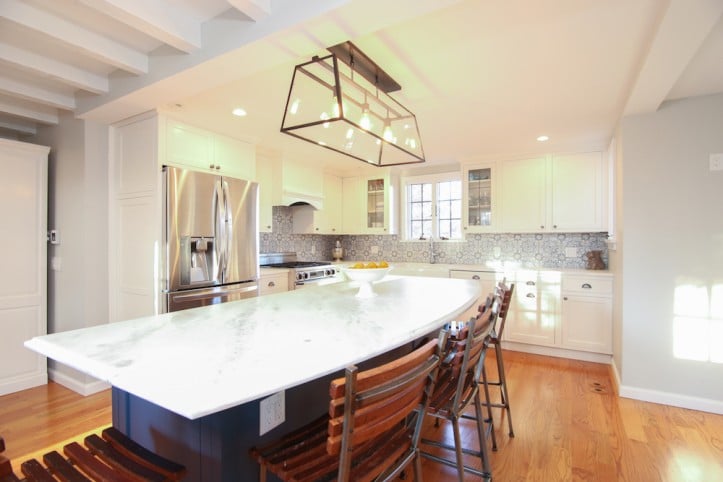 Brooke and Paul embarked on the renovation process without having first lived in the home, which presented some challenges. They weren’t sure how they would use the space, but they did know that they wanted adequate storage, a more open kitchen/dining area, and a large island. Their Sweeten contractor took this information and came up with a solution that incorporated their wishlist. First, they took down the wall separating the dining room and the kitchen and added a large island in its place. “It was also very important to me to have an island that curved out so that when we gathered around to eat, we weren’t in a straight line,” says Brooke.

Given the age of the house, the ceiling in the kitchen was quite low and not level. They would have lost two inches if they attempted to level the entire surface. The solution: their contractor carefully integrated the cabinets within the out-of-level areas and cut the moldings in a certain way to give the appearance of an even ceiling. Brooke tells us, “I struggled with designing a kitchen that I hadn’t lived in before, but our Sweeten contractor was great to work with; he blended my suggestions into his designs and I’m thrilled with how it turned out.”

The couple also chose to install a microwave drawer (a favorite), an extra-large fridge, and two refrigerator drawers just for beverages. Brooke reports that she loves her blue patterned tile backsplash, a splurge that really embraces the Mediterranean architecture of the home. She went with marble for the countertops; after examining other options, she couldn’t find a substitute that would give the feel she was looking for. A soft gray paint complemented the white cabinetry and blue island. The configuration of the new kitchen, which not only combined the dining room but also opened up the existing butler’s pantry, created a better flow and an easier space for the family to congregate. A custom L-shaped dining bench, topped with cheerful blue and yellow pillows, was the final touch to a warm, happy space. 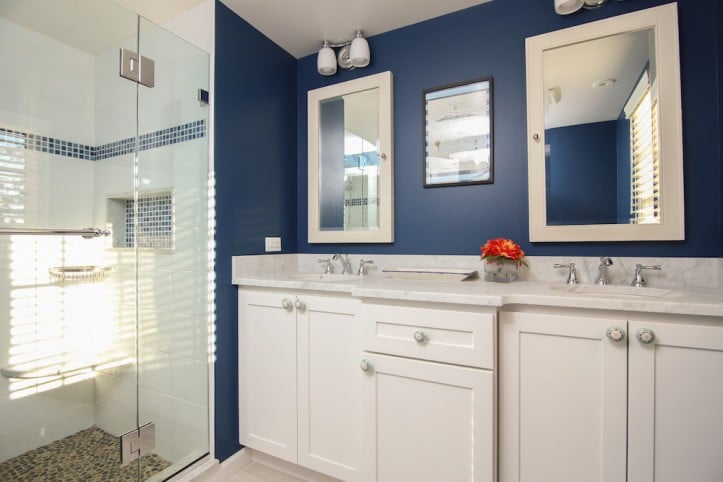 In the master bath, their Sweeten contractor was tasked with creating a vanity that could hold a laundry hamper as well as toiletries and other daily necessities. He worked with the small footprint, since moving the plumbing fixtures would have meant going over budget. In the end, however, Brooke and Paul took about a foot from an adjacent bedroom to fashion a slightly larger space. The new vanity is topped with marble and utilizes all the space available. A walk-in shower with pebbled tile floors replaced the old tub, and a bold custom blue paint was the final touch for a fresh new space.

Now that the renovation is complete, Brooke shares one of her major lessons learned: Paint colors never look the way you expect them to. “I had eight swatches of gray and greige paint on the [kitchen] walls for weeks and finally decided on Wickham Gray from Benjamin Moore. The day the contractor was painting the kitchen, I was working from home. I came downstairs to see a neighbor, and she immediately said, ‘I didn’t know you were going green in the kitchen.’ So we turned around and went with Gray Owl [another Benjamin Moore paint] instead.”

Marrying an old house with modern life also meant taking time to figure out how the family wanted to live and use the space. “We haven’t been in our home for six months yet, so there’s still movement in how and where I store things as we get settled,” explains Brooke. During the demolition, they discovered a time capsule buried by previous owners containing a newspaper clipping dating from the first day of the Iraq War, as well as some information about the family and neighbors. And now, their own house history begins.

Thanks to Brooke and Paul for sharing your renovation story!

Renovating an older house can be a rewarding challenge. These Sweeten homeowners remodeled homes that went untouched for decades.

My Sweeten Story | Pandemic-Life Perfection in a...