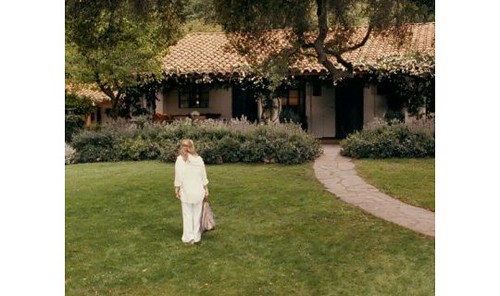 In “It’s Complicated,” which I just saw on DVD, Meryl Streep plays a successful gourmet caterer who carries on with two men at once: her philandering ex-husband (played by Alec Baldwin) and the fussbudget architect who is remodeling her house (played by Steve Martin). If either of these choices seems unlikely to you, just forget about trying to understand why she wants to renovate her house to begin with

Meryl’s movie house is absolutely gorgeous as it is. For exteriors the filmmakers used a rambling adobe ranch in Santa Barbara that was once owned by W. C. Fields. For interiors they recreated rooms on a soundstage in Brooklyn. These rooms, designed by Beth Rubino, earned their own spread in Traditional Home.

The highlight is the immense, beautifully-appointed kitchen, which was spotlighted in Remodelista.  It has white flush-frame cabinets, marble counters, prettily mismatched dishes, and an enormous 60” Viking range. In the movie Meryl comes home from long days at work, heads to her kitchen, and, in what look like lost scenes from “Julie and Julia,” prepares roast chicken, lavender ice cream and fruit pies for her grown kids and kvetching girlfriends. 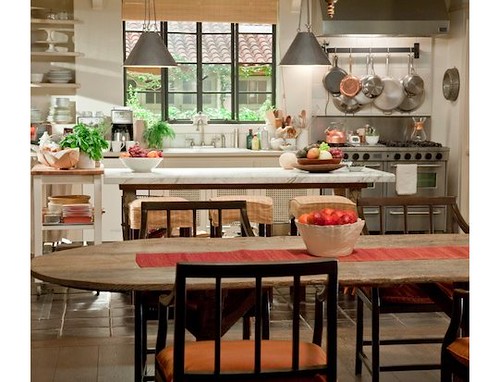 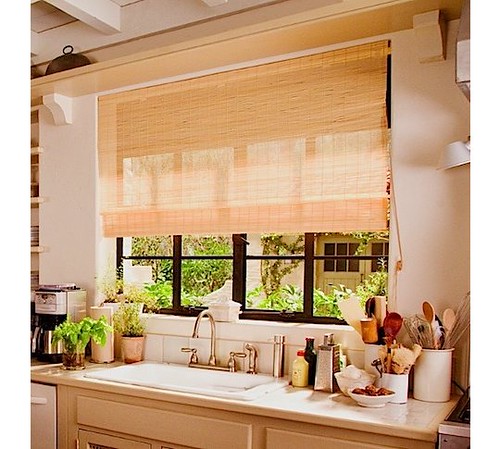 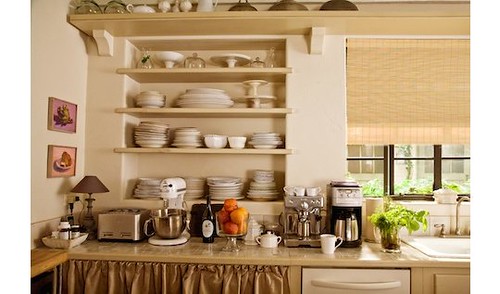 And it’s not just the kitchen that’s perfect. Each room in her house is decorated with a tasteful mess of lovely old things. There are bowls of cut flowers everywhere, and the garden is teeming with Whole Foods-quality vegetables 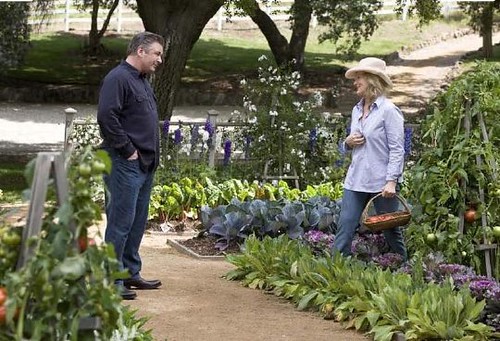 Nevertheless Meryl feels a need to remodel and asks Steve Martin to build her a new kitchen and master bedroom suite. I understand that this is not reality, it’s Hollywood, but this movie took considerable liberties as it depcted the client-architect relationship. When Meryl first meets Steve to review preliminary drawings she turns to him and says, “This is perfect! You knew exactly what I wanted!” I doubt that these words have been uttered by a client in the history of architecture. Then, after Steve has staked out a footprint in the yard to show her the size of the extension, and taken her up on a crane to show her the view from her new bedroom window, Mery Streep opens a bottle of wine and invites him to stay over for dinner, cooking a croque monsieur for him at her giant range.

Steve Martin is charming but he doesn’t make a believable architect. At one point he draws a sketch for Meryl to show her a facade option and it looks as if he’s never held a pen before. Another time, he unrolls a set of full-size construction drawings and it looks as if he’s actually afraid of them. Steve Martin played the same kind of timid, super-earnest architect before in “HouseSitting,” a movie where Goldie Hawn finds him particularly irresistible and, without his consent, moves into his home and becomes his wife. Maybe this is true for men, but my experience has been that there’s nothing about being an architect that makes the opposite sex want to move in with you or cook you croque monsieur. People always find it interesting, but not typically irresistible. 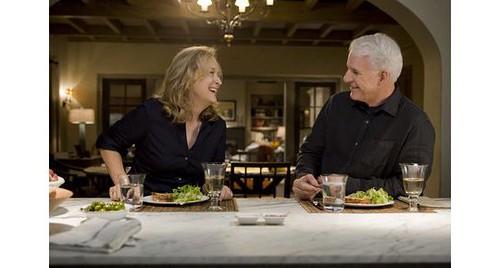 The most improbable part of the entire movie might be the ending. [Spoiler alert!] Instead of hooking up with her fun-loving, expressive, and hilarious ex-husband, Meryl decides to pursue a relationship with her buttoned-up architect while they begin construction on the addition. It just doesn’t bode well. I don’t believe that Steve loves Meryl at all– he’s in love with that beautiful house.