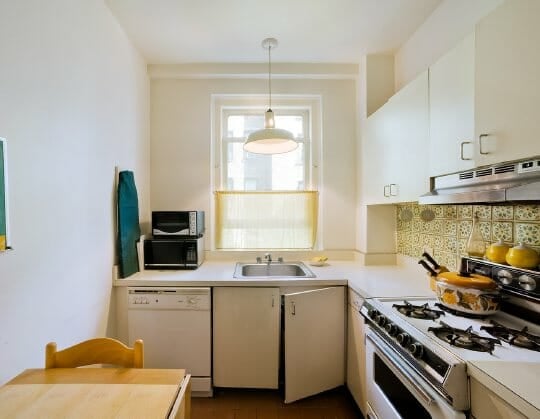 My kitchen was complete after Brian and Joe received some missing trim from the cabinet supplier and finished the top of the upper cabinets. That same afternoon I wiped down the counters, unpacked my dishes, and filled the fridge with groceries. I loved handling the wood cabinets, resting glasses on the stone countertops, and opening and closing the handsome new fridge. I began spending more time in the kitchen in the mornings, lingering over a pot of tea as soft light filled the room.

But my kitchen did not really feel complete, not really feel like my own, until my friends Kristin, Robert and Jean came over for brunch one day. For this, The First Meal, I planned to make broiled salmon. I shopped for groceries the day before and, the night before, studied the oven’s operating manual. Among other things I learned that the low drawer below the oven, which I had thought was the broiler, was actually a storage compartment. This was a crisis narrowly averted!

Turning on the broiler for the first time the next day was quite dramatic. As I opened the door and turned the knob there was an distant clicking noise, the whirring of a fan, and a soft blast of heat. When the broiler reached full heat the stove began to give off a funny rubbery smell. Robert ran inside to ask if something was on fire. Kristin, whose own kitchen was recently remodeled, reassured us that a new stove often gave off a funny smell.

We ate in the living room. When I returned to the kitchen to prepare coffee the others followed, carrying in the dishes. Because of the new layout all four of us were able to to hang out inside. It was really something to see Robert, who is over six feet tall, tucked into the corner near the refrigerator, Kristin leaning against the door frame, and Jean take a seat right on top of my radiator. At the moment she sat down I realized that my kitchen had become the new center for my apartment, a room where I and my guests would enjoy spending time. A New Jersey Condo Gets a Bright Side